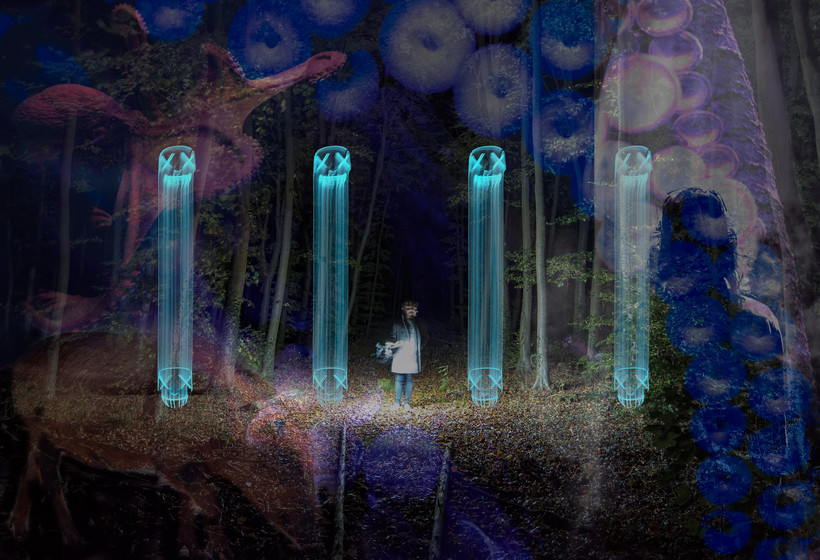 Things That Oink, Reboot, Whisper Or Stump In The Night

4 Ghost Stories From 'To The Best Of Our Knowledge' Listeners
By Mark Riechers
Share:

Why do we tell scary stories? Sometimes to imagine our worst case scenario, or to play out our deepest anxieties within the safe boundaries of fiction. A shudder of fear about ghosts or goblins is often followed by a sigh of relief that it was all a dream.

But the truly terrifying tales imagine what the world might be today or tomorrow if a hypothetical played all the way to an impossible conclusion. How might living our lives entirely online upend the ways we remember those we have lost? If we really knew what was in everything we ate, would we be horrified at what we consume? If a literal monster entered the political arena, how would it do at the polls?

These stories — impossible realities — are for fun. But we share them to help us laugh at the possible things that might keep us up at night.

In the spirit of the season, here are four spooky stories written by listeners of "To the Best of Our Knowledge."

The text of each story has been edited for brevity and clarity.

You Are What You Eat

Listener Jonathan Blyth from Bloomer, Wisconsin sent us a ghost story that might make you think twice about what — or whom — is on your plate.

I'm haunted by the food I eat. How lame is that?

I didn't understand last year why my apartment was slowly accumulating spectral barnyard animals. Phantom pigs rooting in my living room, ghostly chickens foraging in the carpet — seriously, ghostly chickens. There's a flock of them roosting in the laundry room now.

I can't describe the feeling of seeing these hundreds of animals milling around my place, knowing I've eaten every one of them. It's not that they're spooky, exactly, just that there's so many of them. I was lucky to be standing by the sink when a spectral squid flailed its tentacles out of the six quart pot in which I was boiling rigatoni for dinner — with meatballs. The cow will probably turn up one of these days.

Of course, the first time a bear lumbered through the kitchen, I just about wet myself. When did I ever eat a bear? Then I remembered that super yummy homemade pepper sausage my neighbor Randall makes from wild game he hunts. Who knows what all goes in there?

Anyway, that's how it is now. They're just part of my life, like memories, but more vivid. I could go on about the herds of cattle or the clams crusting the toilet bowl. But the real reason why I'm now strictly a vegetarian is this: Three days ago, a girl showed up.

Sixteen maybe. Pretty, with short brown pixie hair. The second I saw her, my mind reeled and I started to feel cold. My stomach began churning. She just looked at me — not angry, at least not at me, just serious — and said nothing. Neither do the tall black woman and boy of around 10 who arrived yesterday morning.

I don't know where they came from, but I can guess. I just hope it wasn't the pepper sausage. Because it was really good, know what I mean? I liked it.

Could being digitized be a way for all of us to become immortal? Maybe, but not in a way we would particularly enjoy, as this story from listener Mark Pantoja illustrates. This listener story was originally from "To The Best of Our Knowledge's" "3 Minute Futures" Flash Fiction competition.

"Welcome back to Re-Life. Would you like to talk to a loved one?" says a computer voice.

I can only talk to her for a few minutes before she starts to ask all the wrong questions and gets upset. I could dumb it down, but then that's not who Abigail was. She was always smart, always sharp, always a step ahead.

"I'll get Abigail on the line," the computer voice says.

I talk to her on the phone. When she was alive, it was always text or chat, or video. I think that's the first thing that sets her off.

"What's so important you had to call?!" says Abigail.

They got her voice right, copied from cell phone and YouTube videos.

"This is what happens when you try to message me."

And they got her pauses and inflection and laughs down perfectly.

There wasn't much of her mind left to trawl after the accident. So they rendered her from tweets and reviews and comments, and likes, and Netflix categories, and all the crap they used to peddle.

Useless garbage to her.

"This is the best thing all week."

They reverse engineered her with marketing.

"I just thought of you."

We talk until she starts to complain about not being able to check her email.

"Why won't my apps refresh?"

She never guesses. Who guesses they're a simulation? But she knows something's wrong.

I don't know where she is. In the ground? On a server in Russia?

There are questions I can't ask. I don't want to know the answers.

"I feel like I'm in a movie or something."

I always end the conversation before any crying. Would she cry?

"I don't know where to begin."

Does her simulation feel anything?

Sometimes I think of letting her go. Erasing her.

How many dark rooms out there are filled with people endlessly replaying loved ones. Or Michael Jackson? Or Elvis?

"Why aren't you saying anything?"

(The simulation ends). "Would you like to save this conversation?" asks the computer voice.

I never do. I always "factory reset" my daughter. So we have the same conversation. Day after day, the same, brief, few minutes when everything is like it was.

I had her rendered so I could tell her how much I love her and tell her goodbye. But I can't do it. I can't let go.

Was she always so affectionate? It's hard to remember what she was like before. Sometimes I wonder how well they've marketed to me.

"We should hang more often! I mis—"

Listener Sophia Derbes from Mandeville, Louisiana sent us this ghost story about a boy, a girl and the divide between them.

He was eight the first time he felt the spirit in the water.

He had gone to the lake many times, swam, dived, loved that water with all his being. He felt the spirit when he sat at the edge of the dock and dipped just his toes in the water. He felt the spirit course through his leg, up through his body, and wrap her arms around his neck. And he loved her. And she loved him. He spent the entire day in the water.

He was 10, and the spirit lapped, restless at his head when he was in the water; at his feet, when he left the water. He swam across the lake, to the bottom again. But nothing was enough for her, and he felt the waves rising above him. And for a moment, he was afraid.

His parents pulled him out of the water, and he left her there, seething.

He was 11 and told the story to his friends for Halloween. He told a story of a girl who hated the land so much that she tied rocks to her feet and became one with the water. He told the story of a dead girl who fell in love with a living boy, was jealous as she watched him grow, and decided to make him her own.

That night he slept more soundly than ever before.

He was 12 and sat out on the dock. The water was calm and sad.

He was 13 when the dock was flooded over completely. The lake overflowed to the land. The water consumed the land. And still, he walked out to it. He walked out to the lake, to the spirit of the water, to the giggling girl underneath it all. And he fell. Her arms wrapped around his neck and he stayed.

Voices whispered over the lake. They sounded almost like the wind.

The 24 hour news cycle did not know how to handle his return.

President Marshall had come to power at a relatively young age. He gave the American people years of gleaming teeth and folksy phrases. When he finally passed away, they talked about revitalizing the two dollar bill in his honor. Then, after a dignified and widely televised funeral, the nation slowly forgot him.

Until his appearances began.

The late President Marshall first appeared at a car wash in Dayton, Ohio, where Gladys Summerland was waiting to clean her Buick Skylark. She'd been one of his supporters, and seeing him again nearly gave her a heart attack. She sold her story to a tabloid for enough to visit her sister in Boca Raton.

The late president was next spotted waving to onlookers at the Founder's Day Parade in Fond du Lac, Wisconsin. After that, he appeared at the Basque restaurant in Elko, Nevada, where he made a speech about the enduring nature of Americans' appetite for success — and apparently also for mountains of mutton.

The problem with the dead president's increasingly public presence was that the actual and presumably living candidates for his former office couldn't compete for media attention. With the election approaching its final months, the ghost of the former President Marshall began visiting the swing states.

At an appearance in Springfield, Illinois, crowds asked him to summon Lincoln. Instead, he announced his own candidacy as a write-in.

The other two candidates held closed-door meetings to discuss a possible alliance. With the reanimated former President Marshall polling so well, even if he didn't win, he could drastically skew results and upset the balance of power the two parties had fought so hard to entrench.

Legal scholars declared that since the late president had evidently begun his second lifetime, he was entitled to another two terms. The ghost candidate won a whopping 70 percent of the popular vote, including many states his party hadn't won in decades.

The two major party candidates vowed to find legal grounds for voiding the election, but the American people responded that they should concede, quit bellyaching and give the ghost president a chance.

Despite the spectacular circumstances, his inauguration was understated. Mainly, the ghost president just smiled and waved to the crowds. Afterwards, in the streets, people smiled a bit more and spoke more freely.

It was clear that they had finally found the candidate they'd been looking for all along.