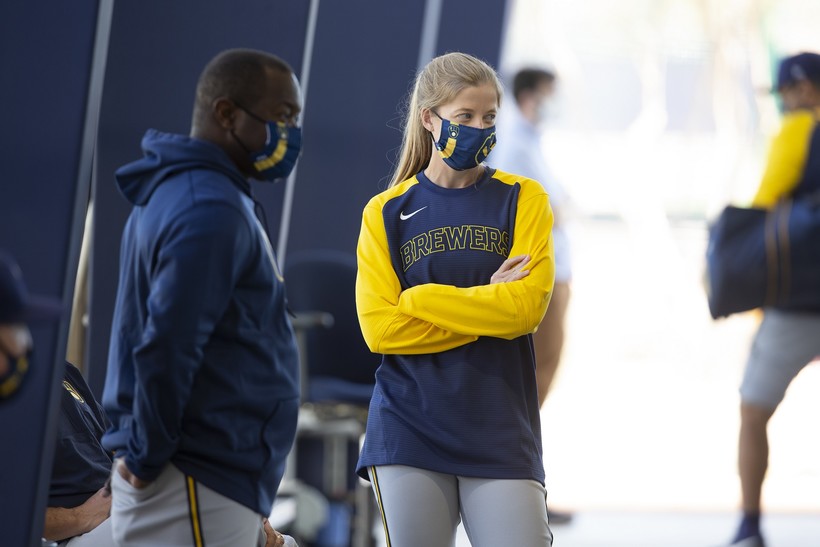 These Women Are Reaching New Heights With The Milwaukee Brewers

Across Men's Professional Sports, More Women Are Turning Up On The Field
By Megan Hart
Share:

Sara Goodrum grew up playing softball, eventually taking her skills to the University of Oregon. Her experience with the sport taught her to focus on things within her control. It’s why she doesn’t spend much time thinking about the implications of being the only woman in her new job.

"What's in my control is how I treat people on a day-in and day-out basis and making sure that I'm as prepared as possible," she said.

Earlier this year, Goodrum was named minor league hitting coordinator for the Milwaukee Brewers. She’s the first woman to hold the title for a Major League Baseball club.

She works with players, from teenagers at the team’s academy in the Dominican Republic to experienced professionals, overseeing the Brewers’ minor league hitting coaches and implementing a hitting curriculum that works throughout the system.

Her favorite part of the job is working with her colleagues and the players as they vie to reach the sport’s highest level, she said.

"Getting to know them as human beings and helping them achieve a lifelong goal of theirs in making it to the big leagues, it doesn't get any cooler than that in my eyes," she said.

Goodrum has always believed she could achieve anything she puts her mind to. And along with a growing list of peers, she’s showing young female sports fans what they might be able to accomplish one day, too.

Last year, Kim Ng was named general manager of the Miami Marlins, becoming the first woman to hold the job with a MLB team. That hiring really struck Goodrum, she said.

"If I ever wanted to pursue that type of opportunity, I have more confidence that if I wanted to, I could, because someone that’s similar to me doing it," she said.

That’s when she realized other women might feel that way about her, too. 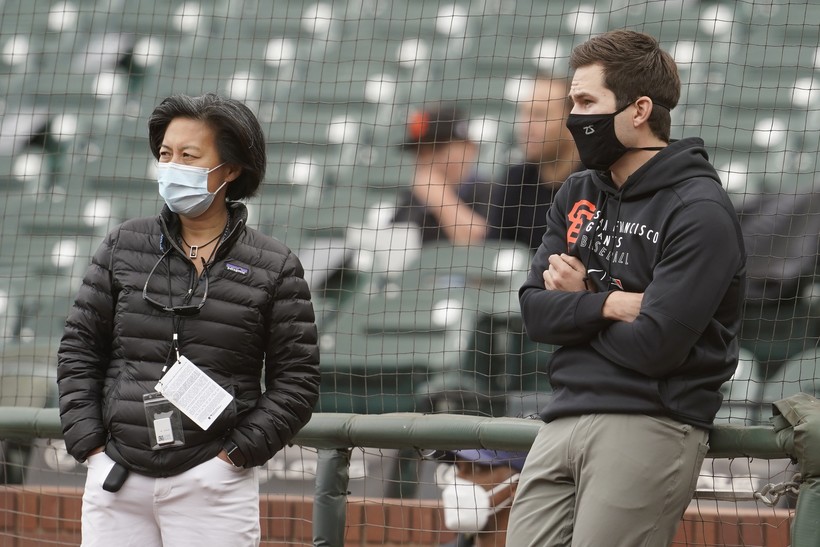 Goodrum is one of more than 20 female coaches across the league this season. They include Bianca Smith, who became the first Black woman to coach for an MLB organization when she was hired by the Boston Red Sox. She previously worked as hitting coordinator for Carroll University in Waukesha.

Goodrum began her journey with the Brewers in 2017 as an intern. She helped the team launch their sports science department, before taking on her current role. Now it’s her job to bring out the best in players, she said.

"I'm just so thankful to (the Brewers) for giving me this opportunity and believing in me," she said.

But ultimately, the fact that she’s a woman doesn’t make much difference to the athletes she works with, she said. Often for young players, what they need most is help to settle in and feeling comfortable. Many are away from home for the first time or dealing with language barriers.

A Special Moment On Opening Day

Goodrum is close friends with another woman who’s been making her way through the Brewers system. After first interning with the Boston Red Sox, Theresa Lau joined the Brewers as minor league physical therapist, then rehab coordinator. Now she’s on the Major League training staff. The magnitude of her achievement wasn’t clear to her until she heard her name announced on Opening Day. 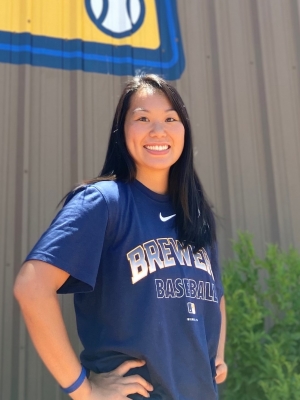 Theresa Lau was promoted to Major League athletic trainer with the Milwaukee Brewers in 2021. Photo courtesy of Theresa Lau

"That's where it kind of hit me that I succeeded, and I achieved this," Lau said. "I know that I am a role model and pioneer for other young women who want to be in this position as well, so it is very humbling."

Lau is a lifelong baseball fan but getting in the door with a MLB team isn’t easy. She was inspired to go for internships after a male classmate landed one in Cleveland, she said.

"There's really no limit of what you can do as long as you keep trying your hardest," she said.

Lau credits a lot of people in her life with helping her get to where she is today, including Nancy Patterson, a mentor and former athletic trainer for the Los Angeles Dodgers. Patterson was the first woman to hold the position in the Major Leagues.

But Lau thinks it’s only a matter of time before her female peers take on top athletic training roles. In fact, the majority of her classmates at Ithaca College were women, she said.

Inspiring The Next Generation

On a sunny Wednesday afternoon in May, Sophie Wery and her teammates on the Seymour High School softball team took to the diamond for practice.

Now a senior, she was part of the Seymour Thunder team that won a state title in 2019, before last season was canceled due to the coronavirus pandemic.

"It was really exciting, especially as a sophomore to go out and be a state champion. It’s an unreal feeling," she said.

She’s been playing the sport for about 12 years, and she coaches younger players. It means a lot to her — and to the young players she works with — to see more women in the professional ranks.

"I think seeing women in men’s roles like that is really inspiring because they are big role models to young women like ourselves who maybe want to pursue something like that," she said.

Her teammate Gracie Schadrie agrees. She pointed out that the trend goes beyond baseball too, with women taking big strides in other men’s leagues.

"There are new refs for the NFL that are ladies too, and it’s awesome seeing that more girls are out there," she said.