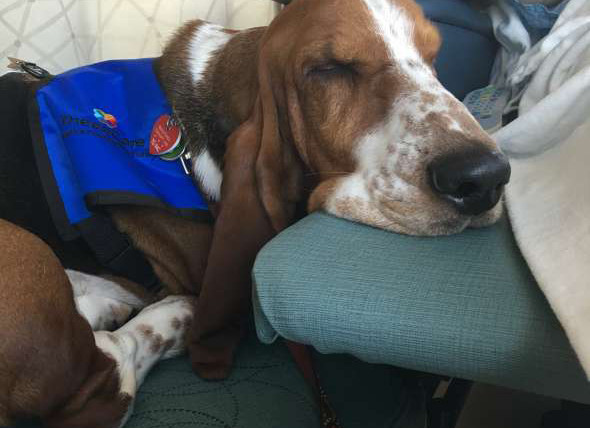 Fitzgerald William is one popular dog.

When the basset hound walks into a room, chocolate-colored and droopy, people smile. They gravitate toward him.

It’s all part of the job, and Fitzgerald William loves it, says owner Molly Johnson. He is a trained, certified therapy dog.

"What we really want in a dog is one who inherently finds joy in visiting with others," Johnson said. "That’s the ethical component to therapy dog work that’s sometimes missing."

Johnson has been a therapy dog owner and trainer for more than 25 years. Over the years, her work has traveled with her from her Oconomowoc home throughout Wisconsin and even during a brief move to Minnesota.

During those 25 years, she has raised 11 therapy dogs. Three are still alive today.

Fitzgerald’s most consistent visits are to the ThedaCare Regional Cancer Center in Appleton once a week.

"He sits with people who are getting chemo," Johnson said. "We have had some really fantastic experiences there."

Fitzgerald even made the local news for his visits there. He also frequents hospices in Wisconsin’s Fox Valley.

And during Johnson’s time in Minnesota, Fitzgerald made the Wall Street Journal after he visited the University of Minnesota-Twin Cities campus for therapy work with students there.

Research has suggested therapy animals can increase levels of the hormone oxytocin in humans, which makes humans feel happy.

It’s work Johnson said she knew she was meant for.

"I really just enjoyed older adults, and I enjoyed animals. And therapy work just was the best of both worlds for me," she said. "It took me a little bit, especially in the beginning, to find the right dog, to do the right kind of work. But this year marks 25 years, it’s a big year for us."

Johnson also trains adults to handle therapy dogs of their own. It’s all hard work, but it’s rewarding work, she said.

"I always joke that I look good at six in the morning, and it’s downhill from there. Because by the middle of the day I’ve got treats under my fingernails, got slobber all over my pants," Johnson said. "But you know what, I’m probably the happiest messiest person out there."

Therapy dogs don’t need to be adopted as puppies to be successful, she said. But as a puppy, she socialized Fitzgerald by getting him used to people.

"I would take him downtown and we would just sit on a park bench," she said. "And if I saw somebody that looked different —  a beard, glasses, a hat — I would ask the person, 'Do you like dogs?'"

If the individual said yes, Johnson gave Fitzgerald the choice to approach the person. If he did, he would get a treat.

"If he finds something about that person fearful, that treat is not going to overcome that fear," she said.

It’s easy to just believe dogs are happy, she said, but there are certain stress signs to watch for that can tell a dog owner the dog’s limits and whether they may be a good match for therapy work.

She said licking lips, yawning or shaking like they’re wet are all low-level stress signals.

"We wanna see really inherent joy," she said. "That in and of itself is a really rare component to a lot of dogs."