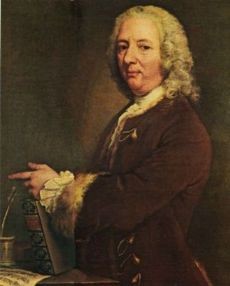 By 1754 Francesco Geminiani was known throughout Europe as a composer of concertos. When he was approached by the director of a Paris theater to write theater music, Geminiani took up the challenge.

The Enchanted Forest was a pantomime based on episodes from Torquato Tasso’s Jerusalem Delivered–a subject that lent itself to splashy special effects, the most exciting that the art of painting and the science of machinery could bring to bear.

The producers kept the plot simple. The story followed events on the Plain of Sharon, near Jerusalem, with scenes set in a Jerusalem mosque and in the camp of a Christian army. In their attempt to bring a new machine into play in their siege of Jerusalem, the Christians are thwarted when the nearby forest, essential for building materials, is enchanted by a magician. Eventually the Christians break the spell and good prevails over evil.

The special effects proved so effective that one marquis scolded their creator for frightening women with his artificial lightning, and prompting others to reach for their umbrellas “for fear of being deluged” by his rain.

Geminiani’s music was considered essential to a successful production, and his name appeared on the title page of the program.

And yet, despite all the talent poured into it, The Enchanted Forest failed.

The marquis wrote that the producers were capable but that the public was expecting something “quite different” from what was delivered.

How much did Geminiani have to do with the failure? A prominent critic remarked that the pantomime was accompanied by “by bad music composed by Monsieur Geminiani that is supposed to represent its various happenings.” But Geminiani had made no apparent effort to reflect the onstage events in his music. His accompaniment sounds like a series of well-wrought but abstract concertos.