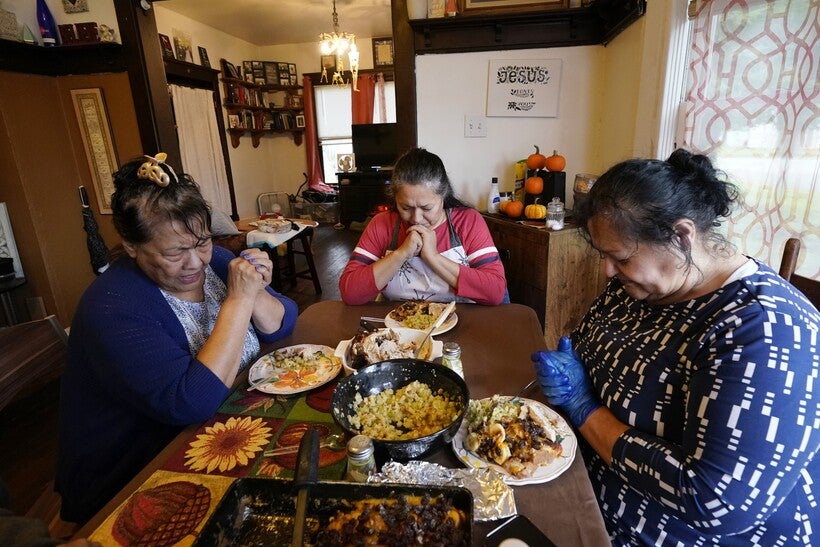 Francis Garcia, left, leads her sisters Anna Garcia, center, and Olga Garcia in prayer at an afternoon family meal Wednesday, Nov. 4, 2020, in the family home in Sedro-Woolley, Wash. On any other Thanksgiving, dozens of Olga's family members would squeeze into her home for the holiday. But this year, she'll deliver food to family spread along 30 miles of the North Cascades Highway in Washington state. If the plan works, everyone will sit down to eat in their own homes at precisely 6:30 p.m. and join a group phone call. Elaine Thompson/AP Photo

While Thanksgiving Celebrations May Be Smaller, Consumers Expected To Buy Traditional Foods
By Hope Kirwan
Share:

While Thanksgiving celebrations may look different this year due to the coronavirus pandemic, food retailers and producers say holiday food prices have remained mostly steady.

An annual survey of grocery stores done by the Wisconsin Farm Bureau found an average Thanksgiving meal for 10 people costs $60.97 this year. That’s $0.60 less than the same meal in 2019.

The survey found the price for a 16-pound turkey was about 7 percent lower compared to last year. Sarah Hetke, communications director for the Wisconsin Farm Bureau, said the slight decline is likely from retailers hoping to entice consumers to still buy a turkey even if it's for a smaller crowd.

"We’re probably not going to have as many people at the Thanksgiving dinner table, but (retailers) are still hoping people will come in and buy those turkeys, make that traditional meal. We just might be eating turkey in some creative ways as leftovers," Hetke said.

Ham prices in Wisconsin are 19 percent higher compared to 2019, after seeing a decline in last year’s survey. Hetke said the market has seen strong domestic demand for pork as well as improved exports.

The survey also found the price of a gallon of whole milk is about 10 cents, or just under 4 percent, higher than in 2019. Hetke said dairy farmers have also seen improved prices for their milk.

"(We’re) hoping to continue to see that price stay strong for our dairy farmers. They've battled with several years of low prices and this spring they really took a hard hit," Hetke said.

Brandon Scholz is president of the Wisconsin Grocers Association. He said store supply chains have largely recovered from the initial shock of the pandemic. But he said consumers may still see some limits on popular holiday items.

"We’ve never really seen limits on bags of flour but then again in the last six or seven months, people have learned to bake — and to bake a lot," Scholz said. "You might see some of that in stores, where they need to put a limit on it just because there’s a run. We saw that in milk for a little while. But it's never a permanent situation."

Scholz said consumer shopping habits changed dramatically this spring because of the coronavirus, with people making fewer trips to the grocery store and preparing more meals at home.

But he said grocery stores are expecting most consumers to return to more normal shopping habits for the holidays.

"We know that people still are going to reach out to their local restaurant and maybe order Thanksgiving to go. That's a good thing for our friends in the restaurant business," Scholz said. "But for the most part, people that are shopping at the grocery store are going to buy what they bought traditionally."

He said each consumer may buy a little less food for a smaller crowd, but stores could see more people preparing their own meal at home than in recent years.