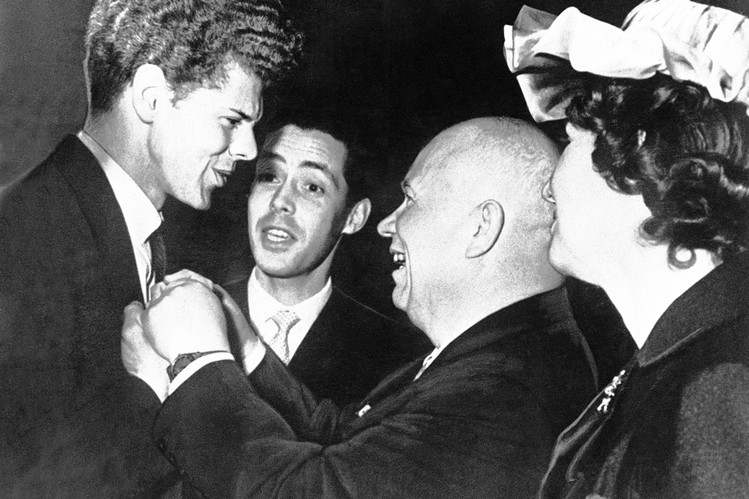 A boyish-looking twenty-three-year-old from Kilgore, Texas walks onstage to compete in the final round of the Tchaikovsky International Piano Competition. Fifteen hundred people are packed into the Great Hall of the Moscow Conservatory.  Thousands more wait outside.  Still more are watching via one of Russia's first live musical TV broadcasts.

The young American is Van Cliburn.  At stake—for the first time ever, will an American win the first prize in this highly prestigious competition? Van Cliburn is the first American many of the Russians have seen, but ironically, he has already won over many in Moscow with the Russian-ness of his playing.

In this final round of the competition, he is to play the Tchaikovsky Piano Concerto Number 1 in B Minor.  Once the frenzied crowd begins to settle down, Van Cliburn takes his place at the piano and gazes out across the hall. No one seems to notice the bandage covering a cut on his right index finger.  The music begins.  Conductor Kiril Kondrashin leading the Moscow State Symphony.

The performance transcends everything Van Cliburn has done so far. After the Tchaikovsky, the American plays a new rondo by Dmitri Kabalevsky.  Then he takes a timeout during the replacement of a broken string. And then he takes on the fiercely difficult Rachmaninoff third Piano Concerto.

The crowd in the Great Hall goes wild.  The ovations continue even after Van Cliburn leaves the stage. Emil Gilels, president of the jury, brings him back for an unprecedented second appearance.

The triumph creates a difficult situation for the minister of culture.  In the depth of the Cold War, an American is poised to win the Tchaikovsky Competition. Leaving nothing to chance, the official takes his problem straight to Premier Nikita Khrushchev.

"Is he the best?" the formidable Khrushchev asks.

"Yes," he's the best," the Minister of Culture assures him.

"In that case," Khrushchev nods, "give him the prize."

It’s a musical decision--and a political one, and soon afterward, a symbolic photograph circulated worldwide shows a smiling Khrushchev embracing the young American whose artistry had helped bring a thaw in the Cold War.