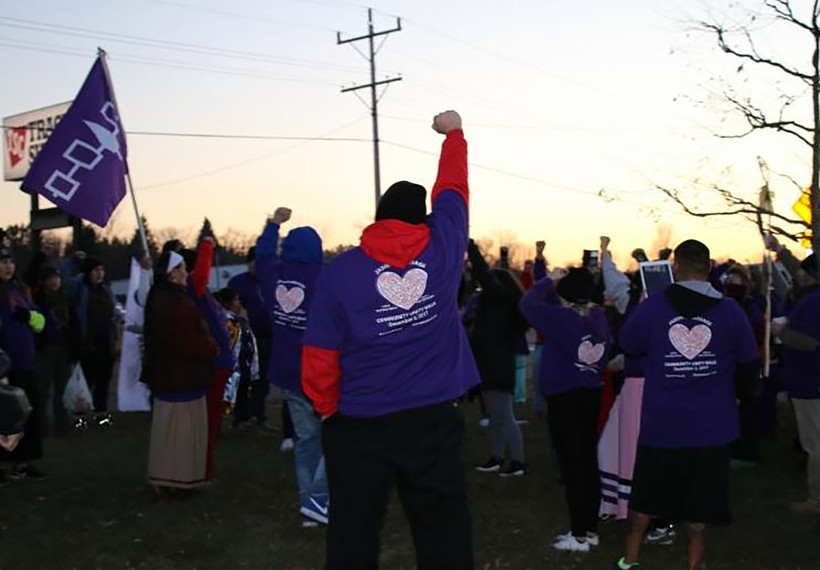 Jason Pero should have been at school Wednesday, Nov. 8, but he left early that day because he wasn’t feeling well. Just before his classmates would file into the cafeteria to eat lunch, Jason was shot and killed by Ashland County Sheriff Deputy Brock Mrdjenovich.

The shooting of the 14-year-old boy on the Bad River Reservation in northern Wisconsin has ignited debate over the tribe’s relationship with law enforcement. Tensions between Native Americans and police aren't uncommon. Data from the Centers for Disease Control and Prevention show that Native Americans are killed by law enforcement at a rate higher than any other ethnic or racial group nationwide.

Now, some tribal members would like to see the tribe cut ties with the Ashland County Sheriff’s Office. At a December meeting, Jason’s mom, Holly Gauthier, fought back tears when she told the Bad River Tribal Council that she felt law enforcement was insensitive and intimidating after the shooting.

"The police going up and down my road when I had family over and stuff," she said. "Even (Jason's) dad backing out of the driveway, and the police officer just slowing down to a creeping crawl and watching him back out of our driveway — like how uncomfortable and unnerving and angry that made us."

Gauthier also expressed anger over how the Wisconsin Department of Justice released its preliminary findings on her son’s shooting.

The DOJ released a statement during Jason’s memorial service that said the teen had lunged twice at the deputy with a butcher knife, refusing commands to drop the weapon. The statement also said investigators found evidence Jason had been "despondent" in the days leading up to the shooting.

"That was so unnecessary and the timing was so wrong … especially when there’s ongoing investigations and those reports haven’t even come out yet," she said.

Mrdjenovich is back at work on administrative duty in the Ashland County Sheriff’s Office. A final report on the shooting is now in the hands of St. Croix County District Attorney Mike Nieskes, who will decide whether to file charges based on state investigators’ findings. Ashland County Sheriff Mick Brennan said Mrdjenovich has had very little contact with the public, but declined to comment further.

When the DOJ reviews officer-involved shootings, law enforcement officers are judged on whether their actions were sound, said state Attorney General Brad Schimel.

"You can be criticized in hindsight that the officer got it wrong, but that’s not the test for the officer," said Schimel. "The test is whether or not they acted reasonably."

The agency’s findings are unlikely to satisfy tribal members who say the shooting is just another example of how they’ve been wronged by Ashland County law enforcement, including tribal elder Sylvia Cloud.

"Who’s going to be accountable for all these things that are happening to our people and our children?" asked Cloud during a December community meeting at the Bad River Lodge and Convention Center. "Some of our women ended up in the jail. They got raped in the jail for cripe’s sakes!"

Cloud is referring to a federal lawsuit against Ashland County, the sheriff and others brought by five women who claim Ashland County jail officer Chris Bond sexually harassed and assaulted them while they were in the county jail. That officer took his own life, but the litigation is ongoing. The lawsuit and the shooting have prompted calls for Brennan to step down.

"We’re never going to get satisfaction until we take that one factor out of this equation, and that’s the state of Wisconsin — the non-native entities that have taken over our lives," he said.

Protesters walk the streets of Madison on Thursday, Nov. 30, 2017, to call attention to the fatal officer-involved shooting of 14-year-old Jason Pero. Marylee Williams/WPR

Some people have questioned why Ashland County, rather than tribal law enforcement, responded to the 911 call made Nov. 8.

The reason goes back to a 1953 federal law known as Public Law 280. The law enacted by Congress ceded criminal jurisdiction on reservations to county sheriffs in five states initially, including Wisconsin. The federal law gave states and counties authority over crimes on Native American lands with the exception of the Menominee tribe. Tribes have expressed opposition to the law for failing to recognize tribal sovereignty while states have taken issue with an unfunded mandate to police reservations. Bad River Tribal Chairman Mike Wiggins told members at the December community meeting that the decision to contract with Ashland County a couple years ago was partly a financial one.

"The financial requirement on our tribe kind of lessened from where it had been trying to run our own police department," he said. "Under the new agreement, we paid for all of the equipment and the car and the insurance for the officers. The sheriff’s department in Ashland County would pick up the tab for some of the other benefits and union-type things that would keep officers around."

High turnover among tribal police officers was another factor driving the decision to contract for law enforcement services, Wiggins said.

Tribes don’t always have the resources to run their own police, court or correctional system, said criminologist Jeffrey Ian Ross with the University of Baltimore, who specializes in research on Native Americans and the criminal justice system.

"It’s not always professional, adequate or run in a manner that complies with basic civil and human rights, codes and constitutions, and norms," Ross said.

But, some Bad River tribal members, including Lori Mae Lemieux, say they can’t afford not to have their own police force.

"I think we’ve already paid the price. There should be no dollar amount on how we save the rest of us and our children here," she said. "There is no dollar amount that is too steep to ensure that we have safety and protection in our community — that we know who these officers are."

Wiggins has said the tribal council is reviewing their law enforcement agreement with Ashland County, including the "appropriateness of service, on everything related to what’s going on with our law enforcement responses."

The Bad River Band has also requested a federal review of the shooting. The U.S. Department of Justice declined to comment on whether it will investigate. But, some tribal members said they don’t trust what the state has to say about the shooting, including Jason's mom.

"We already know what’s going to be in that report: a bunch of bull," Gauthier said.

While the state’s findings may shed light on what happened Nov. 8, they’re unlikely to restore trust between the tribe and law enforcement.