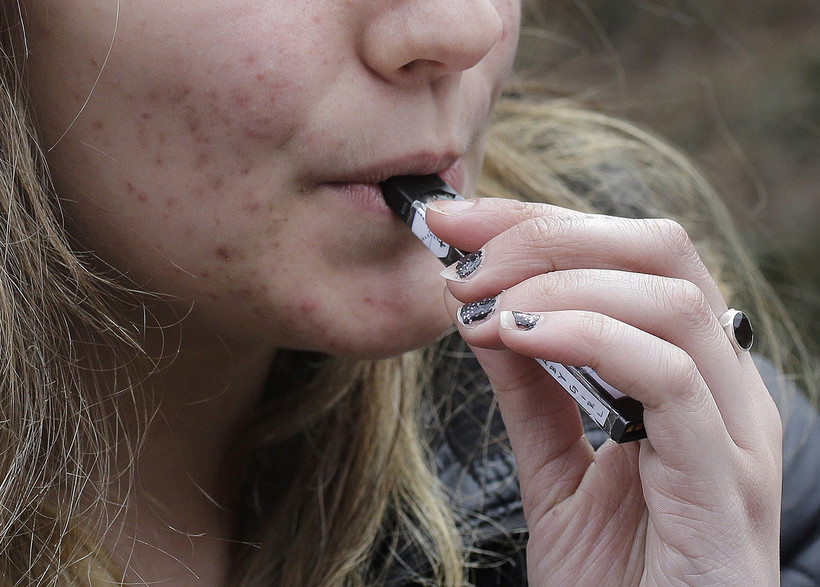 In this April 11, 2018 photo, a high school student uses a vaping device near a school campus in Cambridge, Mass. Steven Senne/AP Photo

Children’s Hospital of Wisconsin treated eight teenagers with severe lung damage all of whom reported vaping in the months prior to being hospitalized.

The teens had symptoms of fatigue, shortness of breath, chest pain, cough and weight loss.

While the cause is unknown at this time, the number of patients within a short time span is concerning, hospital officials said in a press statement. The Wisconsin Department of Health Services is currently investigating the cause of the illnesses. Earlier this year state health officials issued a public health advisory on e-cigarettes after their popularity skyrocketed among youth.

During a press conference Thursday, doctors said only one of the teenagers remains hospitalized. The others have been released but the long-term effects are not yet known.

"All of us want answers," said Dr. Michael Gutzeit, chief medical officer at Children's Hospital of Wisconsin. He said parents are concerned about lingering effects. "They want to know what's causing this. Is there something that should be done from a public health perspective?"

The American Lung Association is calling on lawmakers to raise the legal purchase of all tobacco products, including e-cigarettes to 21 years old and tax e-cigarettes the same as traditional cigarettes. Wisconsin is among states with the lowest such taxes in the country, according to the Wisconsin Policy Forum, a public policy think-tank.

"E-cigarettes contain chemicals, heavy metals and fine particulates. The candy and fruit-flavorings that so many youth find appealing also contain chemicals known to cause irreparable lung damage. These flavorings are designed to tempt kids and give the false impression that e-cigarettes are safe," said Megan Cordova, executive director of the American Lung Association in Wisconsin in a press statement.

Dr. Louella Amos, from the hospitals’ pulmonary medicine program, will be answering questions parents may have about the dangers of vaping during a noon Facebook Live event on Friday, July 26.