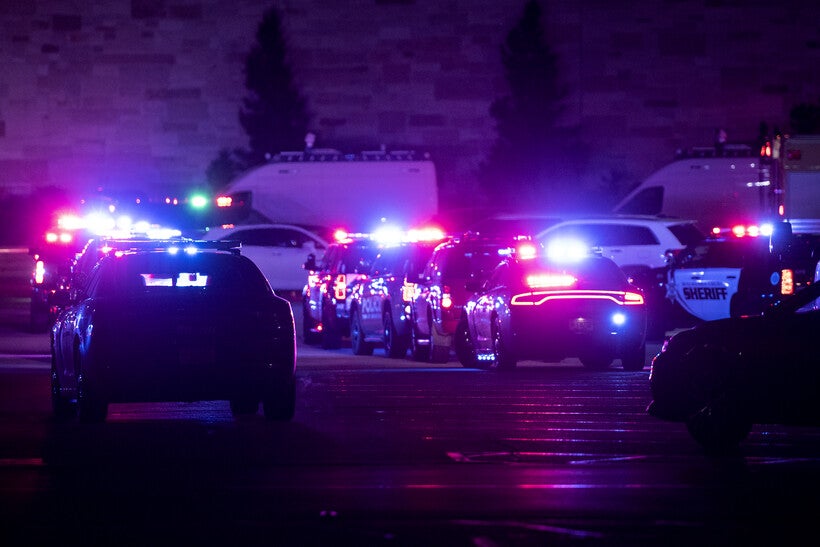 Law enforcement vehicles are parked with their lights on in front of Mayfair Mall on Friday, Nov. 20, 2020, in Wauwatosa. Angela Major/WPR

A 15-year-old boy faces multiple charges stemming from a shooting at a suburban Milwaukee mall that left eight people injured.

The boy appeared in Children's Court on Tuesday and was ordered by Court Commissioner J.C. Moore to be held in secure detention instead of being released to his parents.

Moore asked media not to name the teen, and Wisconsin Public Radio isn't naming him because he is charged as a juvenile.

He is charged with multiple felonies — one for each of the eight victims — and for being armed with a dangerous weapon. The teen was on probation at the time of the shooting, according to the juvenile petition.

During the virtual hearing Tuesday, Moore said the teen's actions were reckless.

"This was a shooting in a mall that was crowded with people, the week before the start of the holiday shopping season," Moore said.

According to the juvenile petition, the teen and a friend were in the Mayfair Mall in Wauwatosa on Friday when the friend confronted some people, then punched someone. Witnesses told police the teen began shooting with a handgun. After firing shots, he was picked up by an Uber across the street from the mall and driven away from the scene, according to the petition.

"We’re talking about a kid who has no ability to sustain himself outside of the community of Milwaukee and who remained in the community until he was picked up Sunday evening," Rifel said.

"(The shooting) involves eight different victims, who were shot, because of an altercation the juvenile is alleged to be involved in. I cannot imagine a more dangerous set of circumstances," Moore said.

The teen was arrested during a traffic stop in Milwaukee on Sunday in a car with Illinois license plates and with the handgun used in the shooting. Two others have been arrested, but their names have not been released.