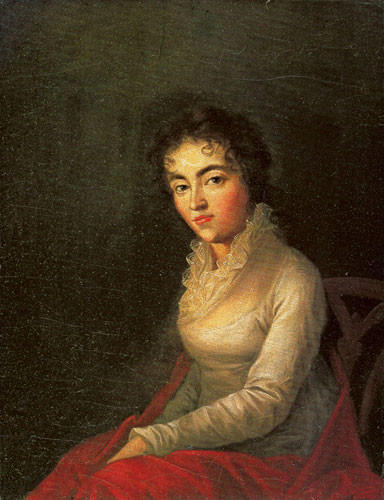 In the spring of 1782, Mozart was a busy twenty-six-year-old composer with music and matrimony on his mind.  On May 25 he wrote from Vienna to his father Leopold in Salzburg, and the letter was a team effort between Mozart and his intended. Mozart wrote:

This time I really do need to steal a moment, so that you don’t have to wait too long for a letter.  Tomorrow our first concert takes place in the Augarten, and at half past eight, Martin will be bringing me in a carriage and we still have to make six visits, which I need to get out of the way by eleven because then I have to go to see Countess Rumbeck.  After that I’ll be lunching with Countess Thun–in her garden at that.  In the evening we will be rehearsing the concert. The performance will include a symphony by Van Swieten and one of mine.  An amateur singer, Mademoiselle Berger, is going to sing.  A boy by the name of Turk will be playing a violin concerto. And Fräulein Aurnhammer and I will be playing my E-flat concerto for two pianos.

Mozart was in such haste that his fiancé, Constanze Weber, finished the letter, saying:

Your dear son has been called away to Countess Thun’s at this very moment, and hasn’t had time to finish this letter to his dear father, much to his regret.  He has commissioned me to inform you since today is posting day, he doesn’t want you to be without a letter from him.  He will write more to his dear father the next time.  Please forgive me for writing to you.  These few lines cannot be as agreeable to you as those from your son.

In the months to follow, a skeptical Leopold Mozart and his optimistic son would continue to cross letters about Mozart’s musical and marital plans.