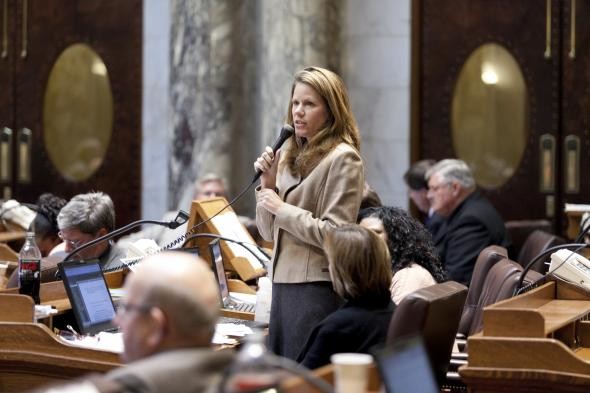 A Democratic state lawmaker says she's taking only some comfort in a top Republican’s calls for smaller cuts at the University of Wisconsin System in the next state budget.

Last week, Assembly Speaker Robin Vos told WisconsinEye that he thought Gov. Scott Walker's proposal to cut $300 million from the university system was too deep. He also said that giving the UW System autonomy didn’t make sense because regents don’t want to make changes to tenure or shared governance, and they might raise tuition as well to make up for waning state support.

But she also disagreed with Vos' reasoning about the proposed transition to a public authority model, calling his statements about tenure and shared governance "perplexing." She accused state Republicans of wanting a UW System they could control without having to fund it.

"I thought (autonomy) was about efficiency, I thought it was about giving them tools to streamline certain procedures," Taylor said. "Obviously it’s about (the UW System Board of Regents) doing what Speaker Vos wants them to do."

Taylor said she's strongly committed to continuing tenure and shared governance, but she also said she saw potential benefits to the UW System turning into a public authority, given more time to study the specific proposal. To do this properly, she said, the proposal should be removed from the budget and considered independently.

The Joint Finance Committee is currently holding hearings on the proposed budget. Taylor said the committee will be making changes in the next couple months, with the final proposal likely to be ready by Memorial Day. Then, the proposal goes to the Legislature for debate.

She said she was hopeful that the cut to the UW System could still be minimized or avoided, and that she wasn’t alone.

"I’m committed to trying to fix this horrible cut, and I know there are Republicans on the committee who are also committed to it," she said.