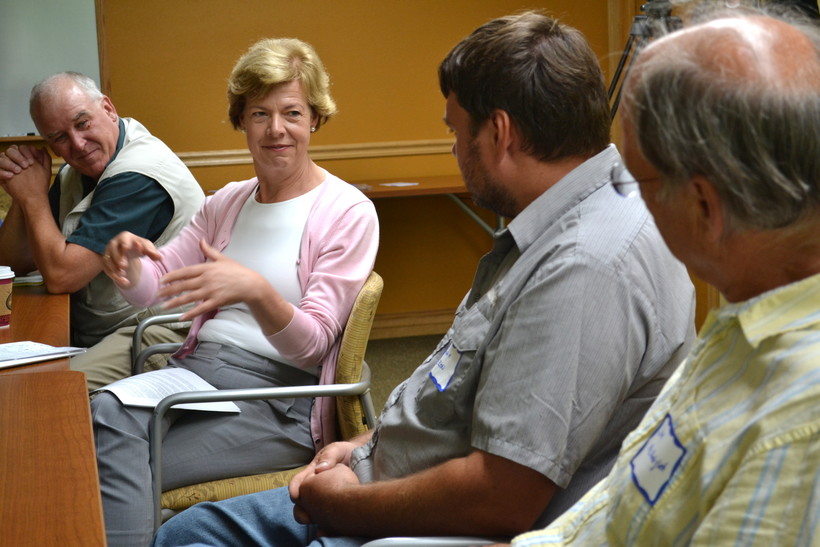 U.S. Sen. Tammy Baldwin hears concerns about clean water from Portage County farmer John Eron, center, at a stop in Stevens Point on her "In Your Corner" listening tour.

While much of the state's attention is focused on the contentious Republican U.S. Senate primary race, incumbent Democrat Tammy Baldwin is holding a week-long series of listening sessions across Wisconsin.

Baldwin said her "In Your Corner Tour" is designed to counter "special interests and out-of-state billionaires" who have spent more than $11 million trying to defeat her.

"It's powerful special interests who call the shots," Baldwin said in a news release. "I'll hear directly from Wisconsinites who want Washington to start working for them."

Baldwin is making more than two dozen stops this week and holding events in 18 counties.

At an appearance Wednesday at the University of Wisconsin-Stevens Point's Schmeeckle Reserve, Baldwin held a session talking about threats to clean water.

"We're a state that defines itself by water, whether that's the literal boundaries of our state or how our economy developed. But we're also struggling with epic political and economic debates that surround water," Baldwin said.

She questioned Portage County farmer John Eron about the cover crops that he was using on his fields to reduce phosphorous runoff. Eron joked about the unlikely coalition of environmentalists and farmers who had come together that day, and who are finding common ground on the issue.

"It was the first time one of our farmers had let an environmentalist on the farm and nobody tried to kill him," Eron said to laughter.

"They were dumping grounds for early manufacturing. We have turned things around and improved the conditions of our waters, but there are more things that need to be done, and there are new threats that have come about that didn't use to exist," she said.

Other topics of the listening sessions include rural broadband access, veteran unemployment, dairy farming, African-American-owned businesses and the opioid crisis.