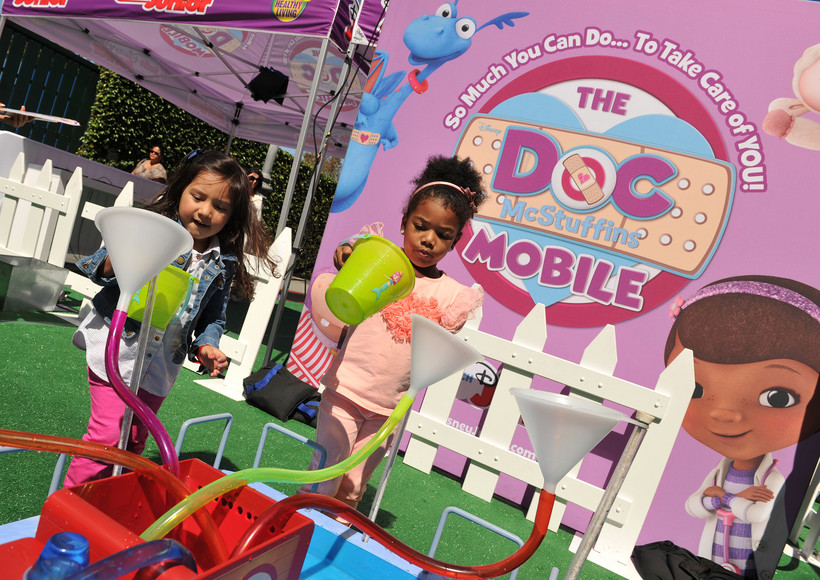 The Doc Mobile, an interactive tour inspired by the acclaimed Disney Junior series "Doc McStuffins," was at The Grove in Los Angeles in September bringing fun experiences related to health and wellness to kids and parents who also met real-life doctors, each women of color and members of Artemis Medical Society which they formed after being inspired by "Doc McStuffins." Disney | ABC Television Group (CC BY-ND 2.0).

Talking To Young Kids About Diversity Can Be A Challenge, But Libraries Can Help

Professor: Parents Should Teach Kids How To Interpret Differences In Media
By Elizabeth Dohms-Harter
Share:

While children might be fans of Doc McStuffins for being able to fix toys, or enjoy puzzle-solving with Dora the Explorer, they might not pick up on racial differences of those characters — Doc is black and Dora is Latina.

Children of color would be more prone to seeing those differences, said Louise Mares, professor of communication arts at the University of Wisconsin-Madison. But that's less likely for white children.

Mares, who said kids start to notice racial features as early as 3 months old, maintains that guardians should talk to their children about diversity and point out differences that can connect children to the world at large.

For example, it might take an adult to point out to that Dora speaks Spanish like their friend from kindergarten.

"Assuming that kids will somehow just be able to know that this character is meant to connect in these ways to the kids I see at school and preschool — that, I think, is a mistake," said Mares, who studies how children interpret and respond to media content.

Neglecting conversations about race might come from well-meaning guardians who are fearful of overemphasizing racial differences but, in fact, it can have the reverse effect of children perceiving the topic as uncomfortable and problematic, Mares said.

While some television shows can help with these discussions, Mares also pointed to libraries as a source of diversity-rich information.

That's because libraries are particular about which items are picked to fill shelves, said Beth McIntyre, a librarian at Madison Public Library.

"It's part of a librarian's job to be very intentional about going outside that stream of finding voices from your own community and different communities across the country that are lifting up diverse voices to make sure you're getting those books in your collection," she said.

Mares said guardians should be communicating with their children by asking them questions about what they see. Using correct language and showing comfort during the discussions are helpful, she added.

"Expressing comfort, being willing to talk about it, being willing to show that you're comfortable interacting with people of different races and ethnicities is part of actually achieving what parents want, which is that their kid has that level of comfort and ease in the world," Mares said.

When visiting the library, McIntyre suggested guardians pick up books that both reflect the child and represent the world around them. She also recommended letting children pick their own books to get a better understanding of what they're interested in.

"There's kind of old saying in children's literature that children need mirrors in windows," McIntyre said. "That's always what we're trying to provide — a window into someone else's life in a mirror and, you know, reflect your own experience."