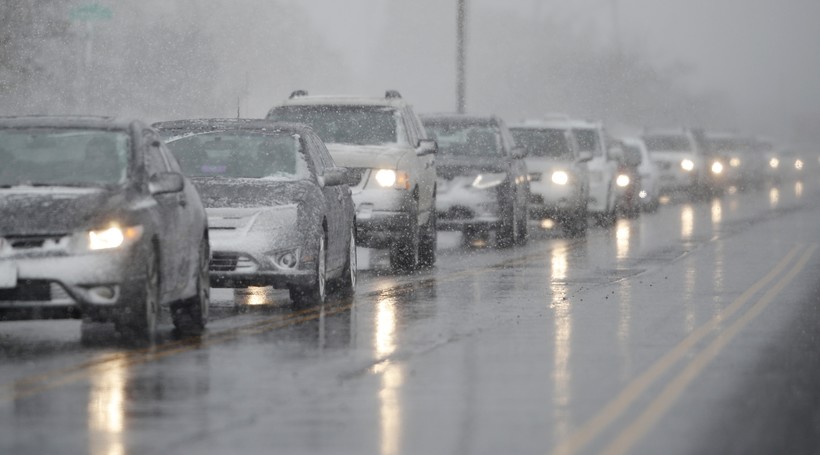 Traffic backs up along 56th Avenue as a spring storm rolls in before the evening rush hour Wednesday, April 10, 2019, in Denver. David Zalubowski/AP Photo

Winter Weather May Persist Into Friday For Many Parts Of The State
By Brady Carlson
Updated:
Thursday, April 11, 2019, 1:10pm
Share:

The National Weather Service said some communities in central Wisconsin, including Wausau, had seen 8 to 10 inches of accumulation as of 10 a.m. Thursday.

Forecasters have said snow may continue through the night and into Friday morning, primarily in northern and central parts of the state.

The rest of the state has seen stormy weather as well, including reports of dime-sized hail in east Madison and "thundersnow" in and around Green Bay.

The state Department of Transportation reported more than a dozen crashes, lane closures and other incidents during Thursday morning's commute.

A stretch of Interstate-94 westbound between Osseo and Hixton was closed for more than five hours Thursday because weather and road conditions had made the highway "impassable."

Interstate-94 reopened at about 1 p.m. Thursday.

Icy roads prompted DOT to classify areas in and around Eau Claire and La Crosse as "travel not advised."

Waves of snow, wintry mix will continue mainly along & north of I-90 this morning. Many roads across SE MN & WI remain snow/ice-covered. In addition, wind gusts of 35-50 mph have caused downed power lines & trees. Use extra caution & take it slow if you must be out traveling! pic.twitter.com/SgLuIeiJQT

The Iowa County Sheriff's Office reported it had responded to five crashes within a single hour late Wednesday.

"We concede to you Mother Nature," the office said in a Facebook post. "Now drivers slow down and relax. You have done this before."

Jessica Felix with the DOT said while the weather remains a problem for drivers, it wasn’t all bad news for plow truck drivers.

"The temperatures are warm, which allows the salt to be effective," Felix said. "They're doing their best to remove that snow and salt off our roadways."

The annual severe weather drill Wisconsin planned to hold Thursday was postponed because of the storm.

In a statement, the Wisconsin Department of Military affairs said "the decision was made to prevent any confusion that may occur if the (weather service) needed to issue any real warnings for severe weather threats."

The storm has also led to scattered power outages across the state.

Chris Ouellette of Xcel Energy said, in some cases, crews have had difficulty getting to outage sites due to icy road conditions.

She added that high wind gusts could continue to affect electric service during the storm.

"We're having what we call 'galloping lines' on our transmission lines, that are also causing momentary outages," Ouellette said. "So people might be seeing blips and not really sustained outages."

Strong wind gusts are also an issue in areas along Lake Superior. A weather station on the bridge between Superior and Duluth, Minnesota, registered a gust of 54 mph Thursday morning.

"The wind will be incredible today," the National Weather Service – Duluth said in a tweet. "Please take this storm seriously."