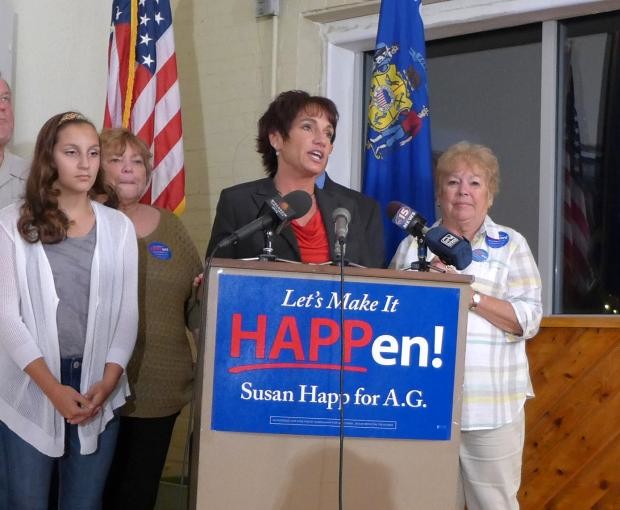 Susan Happ, the Democrat vying to become Wisconsin's second-ever female attorney general, has made it clear that if elected, she'll make women's issues a top priority at the Justice Department.

Happ earned a degree in journalism at University of Wisconsin-Madison before graduating from the UW law school in 1998. After spending 10 years as a lawyer in her hometown trying criminal and civil cases, she ran for Jefferson County district attorney in 2008 and won. She is now serving her second term.

Happ has a tough fight on her hands in this election. Her opponent, Waukesha County District Attorney Brad Schimel, has much more experience as a prosecutor, with 24 years under his belt compared with Happ's six. But Happ says the 10 years she spent in private practice included work as a defense attorney — experience that she says gives her an important advantage.

Like her opponent in the race, Happ has promised to expand the use of drug courts that offer nonviolent drug offenders treatment instead of jail time. She said that right now they're saving the state money, but more funding is needed .

“You have far far more participants than you have spaces available, and what we've seen is too often minorities don't have access to participate in the programs,” said Happ.

Happ said that if prosecutors use their discretion more often to refer black drug defendants to such courts, it could help reduce the racial disparity in the state's jails and prisons.

“Here's the reality: A defendant in Milwaukee may not be treated the same with the same set of facts in terms of their case as they are in Waukesha or Jefferson County," said Happ. “We as prosecutors have a lot of discretion to determine who goes into these treatment programs.”

Happ, however, has taken heat from her Republican opponent for promising to use discretion in defending state laws against constitutional challenges. She said her commitment to defending women's rights means she might not defend a controversial state law now being challenged in federal court that requires doctors who perform abortions to have admitting privileges at local hospitals.

“On that one I would want to take a really hard look at what the legal arguments were made, what the constitutional challenges were,” she said “To be quite frank, personally I have concerns about restricting women's ability to access health care.”

Schimel has said an attorney general has a duty to defend state laws regardless of his or her personal views. That difference between the two candidates may sway some of the undecided voters in this race that polls show is still too close to call.

UW-Madison political scientist Barry Burden said it's a mirror image of the race for governor.

“I would expect on Election Day that everyone is going to vote a straight ticket from the governor's race on down certainly through the attorney general, if not further than that,” said Burden.

Happ has also been forced to defend herself against charges that her office cut a deal in a child sexual assault case because the defendant was buying a house from her. A state agency cleared Happ of any wrongdoing in that case, but Schimel’s campaign still insists that Happ should have referred the case to a special prosecutor instead of assigning it to an assistant DA in her office. It's an issue that may come up in a statewide televised debate with Brad Schimel scheduled for this Friday night.