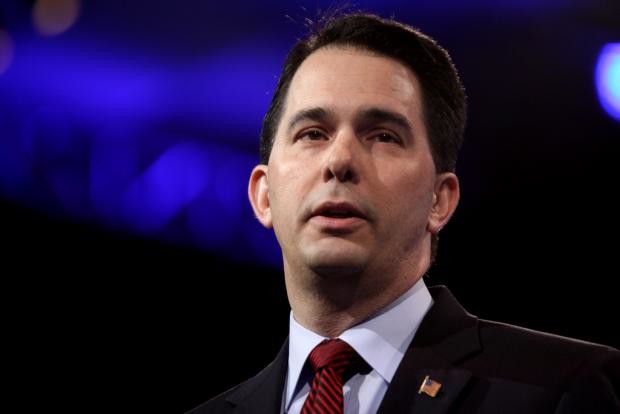 Gov. Scott Walker's approval ratings are at an all-time low, according to the latest numbers from the Wisconsin Survey.

The survey shows Walker with a 60 percent disapproval rating while 39 percent approve of the job he's doing. Many respondents to the statewide poll said they believe his failed run for president earlier this year had a negative impact on the state.

St. Norbert College political scientist Charley Jacobs said that an almost exact "about face" from where the governor's numbers were a year and a half ago.  Jacobs said voters feel the presidential bid affected the nation's view of Wisconsin.

"(Perhaps respondents were reacting to) the way in which he discussed foreign policy and the idea of a fence across the Canadian-American border.  I think some of his strident positions regarding unions and taking that fight to the national level," he said. Most Democrats and independents said that Walker's run had a negative impact on Wisconsin, but even 41 percent of those who identified as Republicans said the same.

Respondents were also asked how Walker's presidential run affected their view of him as a person.

The survey also found that most respondents — 65 percent — said they think Wisconsin is more politically divided now than it was a year ago. Only 17 percent said they thought the state was more unified. For those attuned to what's happening at the state Capitol, these poll numbers present a worrying picture for the governor, but not one that is irreversible.

Jennifer Epps-Addison, executive director of Wisconsin Jobs Now, a Milwaukee Journal Sentinel blogger and an attorney, said that she doesn't think the survey results are that surprising. "It’s not a surprise to me hearing back from Wisconsin families that it’s harder than ever to get by. We're the state in the country with the largest decline in middle-class income. Our governor has refused at every turn to hear the voices of the low-wage workers and the working poor of the state that demand to build a fair economy. He’s refused even the most common sense solutions to the some of the core problems that hard-working people of our state are facing," she said.

Epps-Addison said that she thought several of Walker's policy positions during his governorship are now hurting his popularity.

"There are numerous other examples -- from the devastating cuts to our public education system and our university system to the attack on our democracy and our fair and transparent democracy to the enormous failure that the (Wisconsin Economic Development Corporation) has been under Gov. Walker’s leadership. It doesn't take a genius to see that he is far out of step and out of touch with what everyday Wisconsinites want to see in their governor."

She added that she thought Walker's failed presidential bid has been a drag on his poll numbers.

"Certainly, I don't think it did him any favors. There is a significant national infrastructure of media both of traditional media and new media sources, online media -- and the governor couldn't shield himself," she said. "His lack of understanding of what everyday people are going through and what their concerns are and the changes they'd like to see brought about, he couldn’t hide that from the glare of the national spotlight."

Rather than rebuking his policy stances, Journal Sentinel columnist Christian Schneider said he thought Walker's inconsistent performance on the campaign trail -- in contrast to how he has acted in Wisconsin -- has hurt his approval numbers.

"He was the candidate who was consistent. He was the guy that here in Wisconsin, at least to Republicans, was the one who stood strong in the face of all the unrest and got the Act 10 stuff done. But, when he finally ran for president, he was out there flip-flopping on issues like immigration and ethanol and all these other things … and people were like what exactly is he talking about?" he said.

"I don't think Wisconsin is any better or worse because Scott Walker ran for president. If you tend not to like Scott Walker, then you might actually be happy he was out of the state for a while. I do think there were some policies he pursued maybe because of his impending at the time run for president, things like proposing $1.2 billion in bonding for transportation, allowed him to kind of fund transportation needs without actually raising the revenue to pay for those bonds like a gas tax increase or registration fee increase. But for the most part, I don’t think the fact that he was out running around running for president really affected the state all that much," he said.

Mordecai Lee, a University of Wisconsin-Milwaukee professor, said that he likewise thought the presidential bid was instrumental in dragging down Walker's approval numbers.

"He really revealed himself as a social conservative. When he was running for reelection in Wisconsin, he would never talk about those political, touchy social issues, and really wanted to talk about just job creation, that he was the governor for job creation," he said.

Lee said that during his presidential bid, Walker boasted about defunding Planned Parenthood, limited abortions, expanded gun rights and that he had recently signed the right to work law.

"All this stuff was not stuff he would ever say and certainly not boast about in the state of Wisconsin," he said. "So all of a sudden, we in Wisconsin saw a different Scott Walker."

Lee added that he thought Walker had a critical message on the campaign trail, which contrasted with how he talked about issues in the Badger State.

"When he was in Wisconsin, he would always be the good news governor in terms of economics," he said. "And then when he campaigns for president, he uses negative terms to describe the economy and how the economy is on the wrong track and how (President Barack) Obama has mismanaged the economy and what he would change. So now all of a sudden, he comes back to Wisconsin with this mixed message."

Schneider said that while these current poll numbers might be problematic, Walker is in the midst of his second term to fix his standing with voters.

"Now, he’s got three whole years to kind of repair what he’s done," he said. "He's already been on his kiss-and-make-up with the state tour. He’s really pretty much laid low other than kind of reminding people right off the bat as soon as he got back that he was back in the state."

He added that he thinks the governor can still win Wisconsinites' support.

"There’s still a lot of things that he can do that the people will be in favor of," he said. This is probably a downturn for him, but I think if he just gets back to work, I think everything will be OK for him. I’m not sure he’s running again in 2018 so I don’t even know if it will matter."

Like Schneider, Lee said that he thinks Walker has time to repair his public image.

"Whether one likes him or dislikes him, he has fabulous political skills. In terms of Wisconsin, he's much more sure-footed," he said. "Three years in political time is an eternity."

Lee said that he thought Walker's electoral prospects for a third term appear unpredictable at the moment.

"The mood is negative," he said. "Even though under President Obama and Gov. Walker, the economics, the numbers have been getting better, but the mood is negative. If that continues … then I think he's in serious political trouble and would not be able to come back."