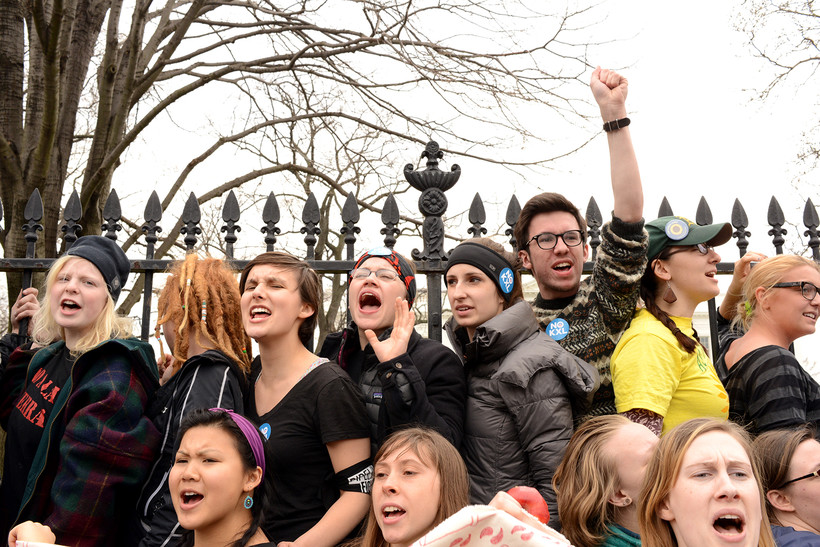 A recent survey of college freshman shows that college students today are much more politically engaged than ever before.  This is something that academic Kei Kawashima-Ginsberg believes could have a significant impact on the future electoral landscape.

Kawashima-Ginsberg said that although youth voting turnout has been on the decline since 2008, at the same time they have been engaged differently, though student activism.

"They have been organizing online, they’ve been innovating the social entrepreneurial field, their divesting, boycotting, and doing all kinds of things that are considered political, just not voting.  So the activism on campus and its surge in the numbers wasn’t surprising," said Kawashima-Ginsberg, director of the Center for Information and Research on Civic Learning and Engagement (CIRCLE) at Tufts University.

However, the voter turnout so far in the recent presidential primaries and caucuses show they are voting now –- primarily for Democratic candidate Bernie Sanders. She said that in the recent Nevada Democratic caucus, the youth vote was higher than the 2008 caucus with votes for Sanders, 8-2, over rival Hillary Clinton.

The motivation that has captured the millennial generation is as diverse as the generation, but economic issues seem to rise to the top of their list, she said.

"For many young people, particularly college students and recent college graduates, that means college affordability and college debt while if you ask young people who are starting families who may be working in low-wage jobs, minimum wage is their economic issue.  Others are also concerned about the economic inequality of our society," she said.

She said that millennials are the most diverse generation to date in U.S. public, both racially/ethnically and class, and the survey showed that many young students of color were more likely to say they were likely to participate in student activism regarding issues of equality.

"It, of course, has to do with the social disparity that many African-American and Latino young people experience at the personal level or at the friends and family level.  These issues around inequality (are) just much more relevant for them," she said.

She said it’s also no surprise that the survey finds that more students are also identifying as liberal as the demographics of college freshman have also changed dramatically since the survey was first given in 1966.