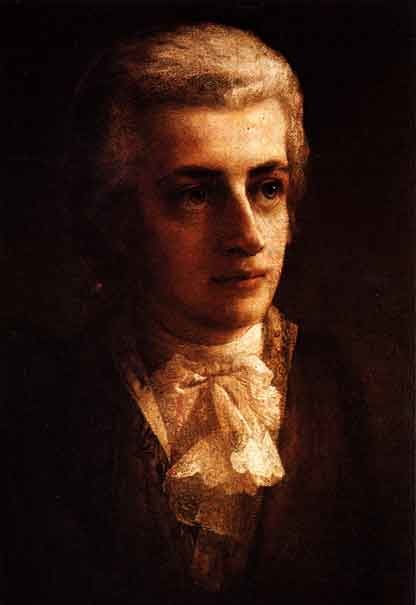 October 31 was Mozart’s name-day–the feast day of Saint Wolfgang, for whom Mozart was named--and when the day came around in 1781, the twenty-five-year-old composer was in for a surprise. A few days afterward he wrote from Vienna to his father Leopold in Salzburg:

Just as I was going to write to you, a mob of celebrating friends overwhelmed me. At twelve o’clock I drove out to Baroness Waldstadten at Leopoldstadt, where I spent my name day. At eleven o’clock at night I was treated to a performance of my serenade for two clarinets, two horns, and two bassoons that I wrote for St. Theresa’s Day....The six gentlemen who carried it out are miserable clods who nevertheless play quite well together, particularly the first clarinet and the two horns.

But the main reason I wrote it was to let Herr von Strack, who goes over there every day, hear some of my work, so I wrote it rather carefully. It’s gotten plenty of applause, too, and on St. Theresa’s Night it was performed in three different places because as soon as they had played it in one place, they were hauled off and paid to play it somewhere else.

These musicians asked for the street door to be opened and, taking up positions in the center of the courtyard, surprised me just as I was about to undress, in the most pleasant possible way, with the first chord in E-flat....

It would be very helpful if my opera were ready because Umlauf can’t produce his at present as both Mme. Weiss and Mlle. Schindler are ill. I have to rush off to Stephanie because he’s finally sent word that he has some of the libretto ready for me.