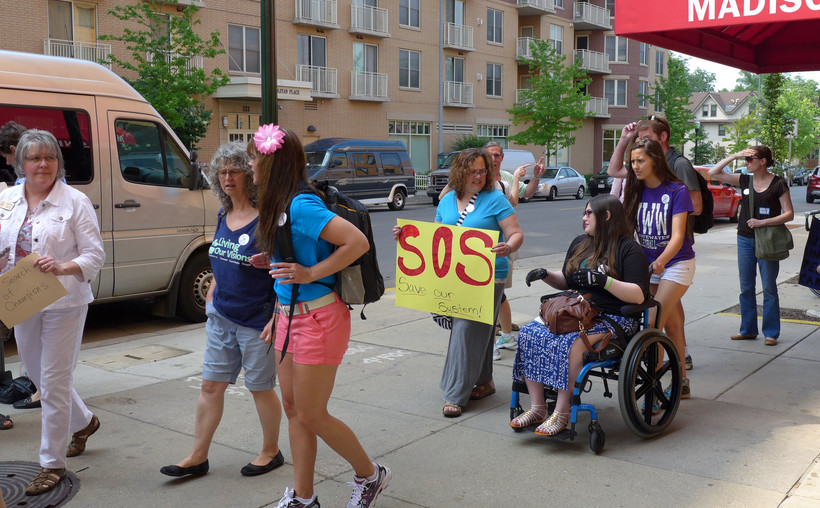 Supporters of programs for the elderly and disabled marched to the capitol Tuesday to try to persuade lawmakers to take controversial changes out of the state budget.

Many recipients of long-term care under programs like IRIS and Family Care are calling for controversial changes to be taken out of the upcoming state budget and re-considered with advocates at the table.

Changes in the state budget would give oversight of the programs to private insurance companies.

Supporters of the programs say they keep people out of nursing homes and allow participants to direct their own care. Portage County Executive Patty Dreier spoke at the Madison Senior Center to a group of long-term care advocates before they walked or wheeled their way to the Capitol to lobby lawmakers.

"This is what amounts to a last-ditch effort to try and control our shared destiny to persuade our legislators to be champions," Dreier said.

Stephanie Mauck, whose 22-year-old son is autistic and has seizures, also spoke before the march.

"We need to be listened to and heard by our elected officials and have them respond appropriately to our concerns by removing long-term care from the proposed budget," said Mauck.

Under the proposal, long-term care services would be combined with primary care and behavioral health. The changes have already been approved by the Joint Finance Committee, but still have to be considered by the full Legislature. More than 11,000 people use IRIS in Wisconsin.