School Officials Say Changes Are Being Made To Prevent Discrimination
By Danielle Kaeding
Share:

The Superior School Board signed off on a change to the district’s dress code policy Monday night. Superior is the latest school district in Wisconsin to update its dress code over concerns that they discriminate against young women and marginalized students.

"I’ve heard from students of color, students living in poverty, families as well, that they feel that those students often get singled out and it has a direct impact on the relationships that kids and teachers really have," said Amy Starzecki, district administrator.

The Superior School Board asked the district to revisit its dress code policy in September. A committee was developed that came up with recommendations last fall for administrative guidelines on specifics of what students can wear.

Under the changes, students can now wear halter tops, hats, hoodies and pajamas. The updated policy states that dress code enforcement "shall not reinforce or increase marginalization or oppression" based on race, gender, religion or household income. 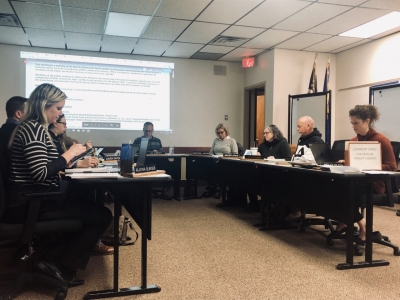 However, some teachers at the district fear the changes may impact school safety at a time when they’re being trained to respond to active shooter scenarios, including Denise Krisak, who teaches sixth grade science at Superior Middle School.

"I have to create a safe environment for them, communicate intruders, location, movements, who they are, identifying them, I can’t tell who they are," said Krisak. "I don’t know if they’re an intruder or not. They have a hood up."

Starzecki said it was the recommendation of the committee to apply the model policy consistently, noting marginalized students were more affected by dress code enforcement regarding hoodies. School board member Laura Gapske agreed and noted it’s parents’ responsibility to decide what’s appropriate for their child.

Yet, others like Karly Caven, who teaches social studies to sixth graders, say students often change clothes when they get to school. She said the change may leave students ill-prepared to face expectations of professional dress in the labor force or negatively impact staff and student relations.

"I’m just not sure how can I, as their teacher, have a positive relationship ... if I have to ask a student to please cover their nipples because it’s distracting other students from learning," said Caven. "When I say that, I’m not being gender specific."

Other Wisconsin schools have encountered concerns with their dress codes in recent years, including those within the Wausau School District and the Kenosha Unified School District.

Kenosha made changes after concerns about its policy following a year-long investigation of gender discrimination and other complaints by the American Civil Liberties Union. Asma Kadri Keeler, staff attorney with the ACLU of Wisconsin, said enforcement of dress codes often disproportionately affects young women because they’re either dated or not gender neutral.

"It’s prioritizing male students’ freedom from distraction over a female’s access to education, which then contributes to a large wealth gap and gender gap that we see in our country and across the world," she said.

Kadri Keeler said the organization has received reports statewide regarding concerns with dress codes, adding that issues exist with policies and a lack of training on how they’re implemented.

Schools should apply policies in a fair and consistent manner and consider what goal they’re trying to achieve when implementing them, said Dan Rossmiller, government relations director with the Wisconsin Association of School Boards.

A spokesperson with the Wisconsin Department of Public Instruction said in an email Monday that it doesn’t specifically track dress code-related discrimination complaints. Kadri Keeler said schools that track disciplinary actions against students regarding such policies may be able to avoid issues with enforcement.

When it comes to such policies and safety, Pomerantz said schools over-respond or overreact in many cases. She noted that what’s considered appropriate or professional dress in the labor force may not be reflected among all groups, adding that school is a place to learn and be social.

"I think it’s ok for school administrators to think collectively with parents, students and teachers about what works for their school," she said.