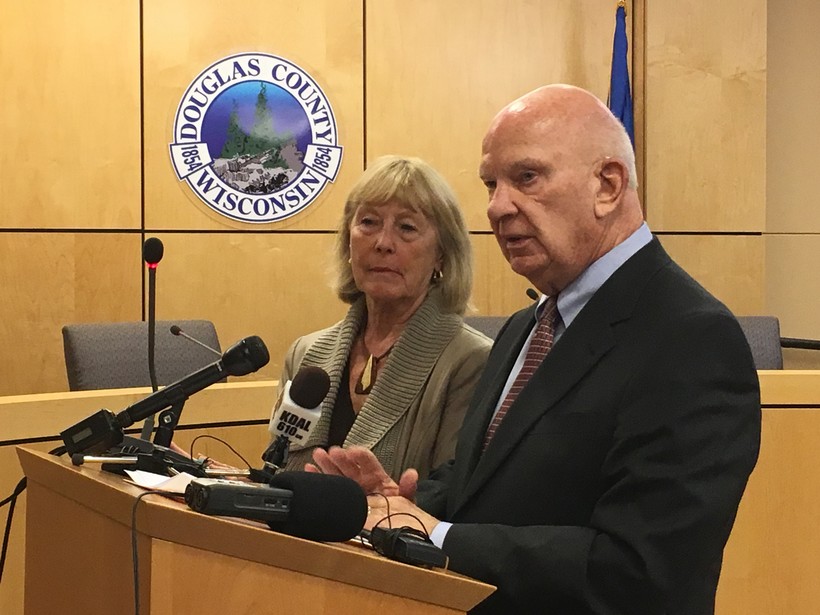 Superior Mayor Bruce Hagen, right, cited the city's unemployment rate, Barker's Island Inn & Marina, and efforts to reconstruct Belknap Street among his accomplishments Thursday when announcing his retirement. Hagen thanked the city's staff for their service, calling them "second to none."

Superior's mayor is stepping down in April, two years before the end of his term.

Superior Mayor Bruce Hagen announced at a press conference Thursday that the stress of decades in public service has caught up with him. The 70-year-old said he's lost his passion for the job and cited health issues among reasons why he's leaving office early.

"Having to put up with special interest groups, having to say 'no,' some negativity among people, comments that I'm hearing already about 'Boy, this guy's going to die?'" he said at the press conference.

Hagen laughed at such remarks, but declined to provide further specifics on his health.

Hagen cited the city's unemployment rate, Barker's Island Inn & Marina, and efforts to reconstruct Belknap Street among his accomplishments. He also thanked the city's staff for their service, calling them "second to none."

When asked how he would like to be remembered, Hagen kept it brief.

"He tried," Hagen said. "That's the epitaph on the tombstone."

While Hagen praised city staff and discussed his passion for the mayoral position, he also voiced frustration with state and federal cuts to local governments.

"The failure of state and federal government(s) to even recognize the importance and the value and the contribution that communities have across the state of Wisconsin and the nation – that particular point has soured me to no end," he said.

Hagen said the city needs "younger leadership," adding the city's next leader should spend more time lobbying state and federal lawmakers on local issues. Even so, he said his decision was not influenced by politics, but a desire by him and his wife, Lois, to focus more on their own lives, family and friends.

He also said last year's controversy over a Facebook comment he made, in which he called President Barack Obama a Muslim, had nothing to do with his decision to step down.

Who Could Be The Next Mayor?

The Superior City Council will decide whether to appoint a new mayor or hold a special election in the spring.

Jim Paine, Douglas County Board member and former mayoral candidate, said he would consider running if a special election were held next year.

"To be honest, it's something I've considered since Election Day," Paine said. "But, I really didn't expect to have to make a decision this soon. It's worth noting the city council decides whether to have a special election. They haven't decided to do that yet. I think we need to respect that process."

Paine congratulated Hagen on his retirement and years of service to Superior.

"The mayor and I have had our disagreements, but on the whole I think he's done a lot of good things for the city of Superior," Paine said. "If nothing else, he's served for a very long time. Having served in public office myself, it's a demanding job. It's often a thankless job. I have a tremendous amount of respect for anybody who does it."

"I was planning on running again at the end of his regular term," Herrick said.

Herrick made light of the mayor's call for younger leadership. "Hopefully, I would qualify for that area," he joked, adding that younger people always have a voice in government.

"I'd love to see young people give more input," Herrick said. "Whether they want to run or not, that would be up to them. But, if they don't, their opinions still matter."

Former mayoral candidates Kalee Hermanson and Greg Mertzig said they're also weighing decisions to run based on the council's decision. Hermanson said it's been a pleasure to have the mayor mentor her during his tenure in office.

"I've learned so much from him, from watching what he does," she said. "I'm so excited for him to just spend some time with his family and enjoy his life. He's worked hard."

Mertzig thanked the mayor for his service, but expressed disappointment the office would be vacated mid-term.

"If I knew two years ago what I knew today, I wouldn't have run,” Hagen said. "I was worn out two years ago."

Superior City Clerk Terri Kalan said the city council will be tasked with deciding whether to hold a special election or appoint someone to carry out the remainder of Hagen's term after he steps down April 30. The earliest a special election could be held is July.

"We would have to find that in someone else's budget, but that's a council decision," Kalan said.