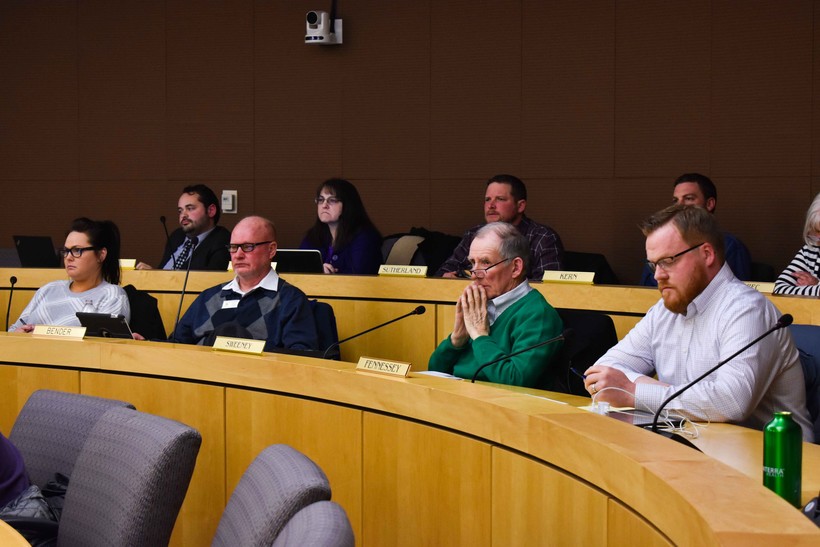 The Superior City Council overturned the mayor’s veto of a vote to censure one of its members on Tuesday night following questions about a potential conflict of interest.

Councilors had voted to censure Councilor Jenny Van Sickle at its last meeting for critical comments she made on social media about the quality of the city attorney's work. Superior Mayor Jim Paine vetoed that censure. But, councilors overturned the veto in an 8 to 2 vote on Tuesday.

The mayor’s veto led to questions over a potential conflict of interest since Paine is in a relationship with Van Sickle.

After the meeting, Van Sickle said she hasn't done anything illegal or unethical and she's not concerned about any appearance of impropriety.

"In these chambers, I’m a councilor. I’m qualified. I was elected and re-elected on merit, and I’m proud that I have the guts to stand up to city attorneys that are making well over $100,000 to prosecute our citizens on their parking tickets," she said.

During the meeting, Van Sickle said she was "not particularly proud" of the hurt she had caused through her remarks about the city's attorney, stating previously that he has a "reputation of repugnant incompetence." The city’s attorney, Frog Prell, filed a notice of claim last week alleging that Van Sickle’s remarks rise to the level of libel and slander.

Following the meeting, Paine said people will make up their own minds about his relationship with Van Sickle.

"The fact is all kinds of relationships occur in government, especially local government all the time," he said. "It really is just up to the voters to decide if that’s inappropriate."

The city council’s president, Brent Fennessey, said after the meeting the only thing that bothers him about it is the imbalance of power that it could potentially create.

He said relationships between friends or family members who have served on the council don’t hold the same significance.

"It doesn’t say anything regarding friends or other relationships, romantic or otherwise," said Freeburg.

Freeburg said local ordinances may be more broad. Superior’s code of ethics says no officer or employee may use a public position to influence or gain unlawful benefits, advantages or privileges for the official or others.

Councilor Tylor Elm was one of two council members that changed his vote to override the veto on Tuesday. Elm said it appeared the veto didn’t follow proper procedure, according to the Wisconsin League of Muncipalities handbook for municipal officials. The city council’s president shared similar views prior to the vote.

"The veto is to be used for legislative purposes or acts. Because of that, that was my reason because my votes that I’ve done have always been in the purpose of following the law," said Elm, noting the veto didn’t appear to be a legislative act.

The city’s mayor disputed that argument, noting the censure was brought forward as a resolution.

"All resolutions are legislative. It’s a statement of what the council believes and that’s perfectly within the scope of a veto," he said.

Regardless, the mayor called the override one more symbol of, "just a bunch of nonsense" in recent weeks. He said the council hasn’t been able to focus on the real challenges facing the community, such as housing and infrastructure.

The public and councilors expressed disappointment in the actions of the council and its members during the meeting. Yet, Councilor Craig Sutherland said during discussion that city employees have been impacted by negative remarks, adding they also pose a challenge for attracting new staff.

"Let’s get back to where we were. Let’s treat each other with respect and move on," said Sutherland.

Van Sickle said people in Superior are disappointed in the council leadership's inability to move the city forward.

"And continue to belabor something that people were absolutely tired of talking about," she said. "I regret nothing."

She called the censure and veto override a stunning example of hypocrisy, noting the actions of other councilors have not been called into question. She said there's a, "good old boy" mentality that persists in local government.

Despite a contentious few weeks, the council’s president said the body often works together to address a broad variety of issues.

"We have to move forward collectively as a body," said Fennessey.