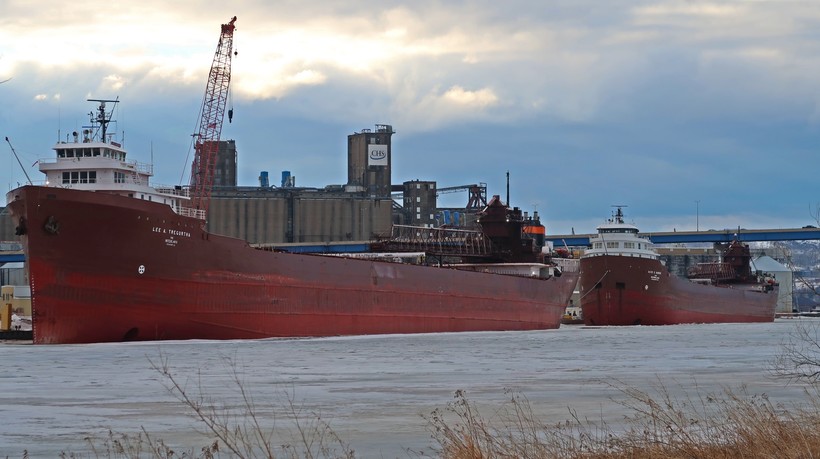 Superior Advances Project To Clean Up Contamination In Howards Bay

Cleanup Inches Forward On One Of Great Lakes' Most Polluted Sites
By Danielle Kaeding
Share:

The city of Superior agreed this week to work with federal, state and private partners on a roughly $18.5 million project to clean up contamination in Howards Bay.

The Superior City Council approved agreements on the project on Tuesday, marking the city’s commitment and contributions to cleaning up contamination in the bay. The agreements were the final step for the project to become eligible for federal funding this year, said Joe Graham, Lake Superior sediment and monitoring coordinator with the Wisconsin Department of Natural Resources.

The Howards Bay remediation project seeks to remove contaminated sediments in the harbor through dredging to improve shipping and restore fish and wildlife habitat. Graham said the bay is contaminated with metals like lead and mercury, as well as polycyclic aromatic hydrocarbons (PAHs). The sediments also contain tributyltin. The compound was used in the paint of ocean-going ships to prevent the growth of marine organisms like barnacles. The chemical has since been banned.

"Back in the days before there was environmental regulation, there wasn’t a lot of thought given to what we were putting into the water. Those contaminants now are a legacy that we have to deal with today and restrict our uses of those waterways," said Graham. "Addressing those contaminants, getting them out of the environment and contained somewhere where they can be managed is a benefit for everyone."

As part of the agreements, the city of Superior will pay for the cost of stormwater treatment related to the project, as well as any road repairs from hauling dredged material. The city will also accept dredged material at the Wisconsin Point landfill, which has been closed for almost 40 years.

Darien﻿ne McNamara, environmental regulatory manager for the city of Superior, said the landfill will only accept material that is clean enough, which is material the Wisconsin DNR calls safe for recreational development. She said there are limits on how much contamination can exist within the soil, and a binding agent will be used to lock in contamination to prevent any releases from the landfill.

"They’re capping it with clean material — imported topsoil — that’s not coming from Howards Bay and then covering that all with vegetation," she said. "With all those different measures in place, I really think it’s going to be an appropriate place to put this material."

Around 87,000 cubic yards of dredged material would be placed at the landfill, according to the Wisconsin DNR. The city is providing around $2.6 million through its in-kind contribution to the project since Superior has been cited as source of legacy contamination, McNamara said. The city has three stormwater outfalls that drain into Howards Bay.

"Back when there was leaded gasoline running on the roads and more chemicals being used, that stuff was being washed into Howards Bay, and it’s still sitting there in the bottom of the bay. That was carried through our stormwater system," she said. "We should be playing a part in the cleanup, and I think we’re making a meaningful contribution to the cleanup."

Fraser Shipyards in Superior is also contributing more than $2 million to the cleanup project. Fraser has already provided around $600,000 for design on the project, said James Farkas, president and chief operating officer of Fraser Industries.

"From the community standpoint, I think it’s the right thing to do for the environment and for the future economic and regional recreational growth for the city of Superior and Twin Ports," said Farkas. "Specifically to Fraser, it just allows the channel to be dredged to the congressionally-mandated depth to allow for navigation."

Lynn Rose, director of public affairs for the U.S. Army Corps of Engineers out of the Detroit District, said the agency is working with the EPA on the project and has completed around 95 percent of the design work. She said the remainder of that work is expected to resume in July pending federal funding.

"We are partners with the EPA on cleaning up areas and helping that Area of Concern to get to a level that is acceptable in the standards for the Clean Water Act and EPA," she said.

The majority of funding for the project would be provided by the EPA through the Great Lakes Legacy Act and Great Lakes Restoration Initiative. An EPA spokeswoman said the agency will release funding to the Army Corps to complete design work once the cost-sharing agreement is signed. Federal funding will pay for 64 percent of the cleanup with the remaining 36 percent coming from state, city and private partners. The cleanup is expected to begin sometime next year and take a year to complete.

The EPA will decide this month which cleanup projects will receive funding, McNamara said.