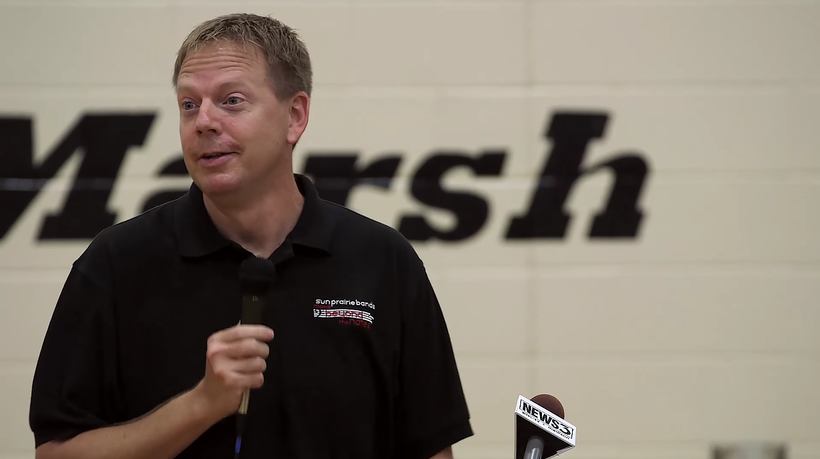 Chris Gleason accepts his 2016-17 Wisconsin Teachers of the Year award in the Patrick Marsh Middle School gym in Sun Prairie in September after being named middle school Teacher of the Year. Courtesy of Wisconsin Department of Public Instruction

The National Teacher Of The Year Finalist Explains Significance Of Teaching
By Nyajai Ellison
Share:

It’s been 50 years since a Wisconsin teacher was a finalist for the National Teacher of the Year Award. But, Chris Gleason, an instrumental music teacher and band director at Patrick Marsh Middle School in Sun Prairie, is proud to bridge that half-century gap.

Gleason was named Wisconsin’s middle school Teacher of the Year in September, and now he’s among four finalists competing for the national honor this year.

"Anything is possible, and that’s the absolute belief that I have as well," Gleason said. "With a great education, kids can achieve their dreams."

Gleason has been an educator for almost two decades and a music instructor at Patrick Marsh Middle School for more than 10 years. He said one of the major keys to a successful future and improving education is through building connections with students.

When people think about their favorite teacher, people are likely thinking back to how the teacher inspired them, he said.

"It’s something that they did that spurred (something) inside of us, inspired us – it probably wasn’t something that ended up being on a test, and that’s what’s important," Gleason said. "It is the connection that we make with every student."

However, like other professions, Gleason said being a teacher isn’t a walk in the park. He encourages educators to reach out through social networks and continue to support teachers and people becoming teachers.

"This can be a lonely job, and its difficult work," he said. "We have to continue to look at how we finance schools."

Sun Prairie is considered one of the fastest growing districts in the state of Wisconsin. Nonetheless, a two-part referendum passed in November to fund the construction and staffing of two new elementary schools for the district. While new schools may be good news for some, it creates the opportunity of harsh realities for people like Gleason.

"The problem though, is that next year we're almost like (at) a $2.5 million deficit, so we're looking at cutting positions," he said. "It’s kind of ironic that my job might be the one that could be cut, and that’s the reality of this situation."

"This idea of looking at public education and how to reduce financing, it’s so important," he said. "We need to continue to look at ways to finance our schools and do a better job, because obviously our kids are worth it; they’re our future."

"I would try to do that to inspire my colleagues in the profession and to rebuild the public’s positive perception of teachers and to encourage our young people to consider this noble profession," he said.

The winner of the National Teacher of the Year award will be announced in the spring. In the meantime, Gleason will continue to use music as his vehicle to educate his students.

The national award is sponsored by the Council of Chief State School Officers. The winner then spends a year traveling the United States representing teachers and advocating for teachers and students. The remaining three finalists are from California, Maryland and Massachusetts.