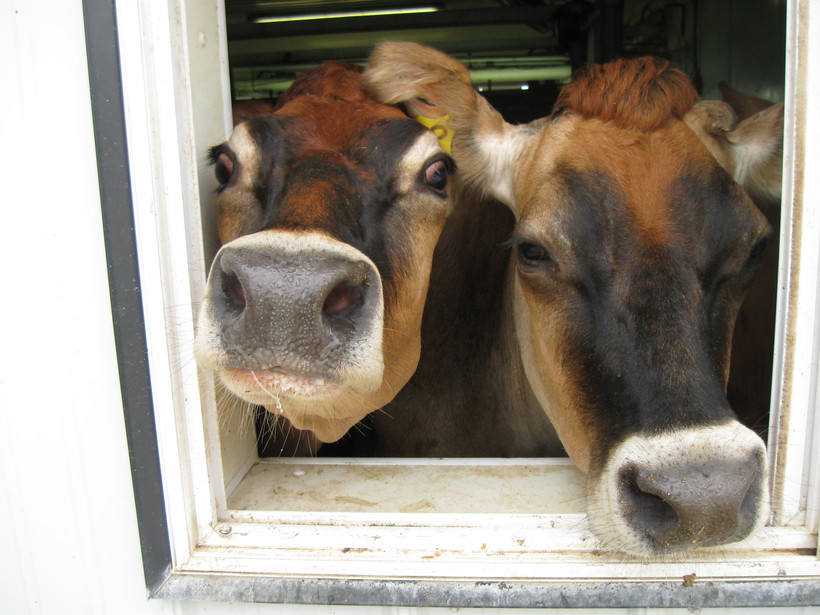 It's not just crops suffering from this season’s drought in southern Wisconsin.  Cows are feeling the heat too, and they're producing less milk.

At Amundson’s farm near Westby, milk is gently vacuumed from metal cylinders attached to the cows, and fed to a holding container.   Nearby, Amundson checks a readout, which shows the amount of milk each cow is producing. The closest one to him is churning out almost seven pounds of milk a minute.  Months ago, Amundson’s herd did better.

But in the spring, he noticed a drop in his herd's production. The days were hot and humid and his cattle weren't eating as much.  On average, they had been producing 60 pounds of milk a day.  Amundson says that number has dropped to about 55 pounds of milk a day.   Amundosn is lucky because other farmers have seen larger declines. Still, he says the drought is costing him money because production is below what it should be. "About 100 dollars a day I’m losing, that’s three thousand dollars a month," he says.  "Plus an increase cost of feed, because of this dry weather, feed costs have gone up dramatically-that’s what you look at. You drop in milk but the price of your inputs are so high, yeah, there’s not a farmer that’s making money right now."

Amundson says his pasture doesn’t have enough shade  to relieve his 120 head herd from the brutal heat. So, he focuses on keeping  his cattle cool inside the barn.  Despite his best efforts, the heat has a way of getting in.   "We’ve had where we go in there with a water hose and spray them off," he says.  "To keep them cool just like that, because even though we have tunnel ventilation, if it’s a 105 degree heat index outside, and we have an air blowing through the barn, roughly seven miles an hour wind going through a barn, you’re still blowing warm air."

Amundson ships his milk to the Westby Cooperative Creamery everyday.  The company is known for its dairy products, like cottage cheese and cheese curds.  General manager Pete Kondrup says he’s contending with a 20 to 25% drop in the amount of milk member farmers are bringing in.  "We depend on milk getting here so we can do the products so if the milk keeps going down then it will be harder and harder for us to keep running all the products we need to run," he says.  "We have to buy surplus milk which will be more expensive, so we’ll have to raise prices more."

Kondrup says consumers could see a 15 to 20 percent price increase later this year. But, the issue of milk availability is not the only problem tied to the heat.   Kondrup says the composition of the milk has changed too.  The butterfat and protein levels have lowered. "When that drops you get less cheese per one hundred pounds of milk," he says. "So that it means you need more milk to make a pound of cheese."

To stay profitable there are farmers around the state who are phasing out lower performing cattle,. With Their pasture  in tough shape and the cost of feed is going up, its expensive to keep them around.

Due to drought damaged crops, some farmers are getting rid of underperforming cows. But, Amundson says he doesn’t plan to do that,  He’s giving some of his underachievers a second chance.  "So you just go on and hope the next year will be better," he says.  "I mean you look at records of what cows produce prior years, their ancestry, if it’s a good cow, you keep em."

When the cooler weather returns, Amundson says his cattle aren’t out of the woods yet. Like many other dairy farmers, he says cattle have a chance of producing a disease call mastitis 2 weeks after the heat dies down.  The disease infects the mammary gland. "You might through the heat spell say, “Man, I had no mastitis the cows did good, but its two weeks after the heat spell that’s when you flare up with mastitis like that, their immune system can fight it for so long, then you have vet bills and every thing else."