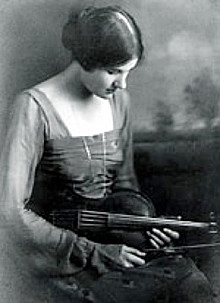 At every promising turn in her musical life, Rebecca Clarke faced a stumbling block. In 1902, at the age of 14, she entered London's Royal Academy, where she studied the violin and began to compose songs. In her third year there, her harmony teacher proposed to her and her father forced her to drop out.

In 1907, after three years at the Royal College, Clarke quarreled with her father, who cut off all support. She made do as a violist in the college orchestra and in 1912 she joined the prestigious Queen's Hall Orchestra.

In 1919 she wrote a viola sonata for an American competition sponsored by Elizabeth Sprague Coolidge. Her sonata, which had been submitted under a pseudonym, tied for first place. Mrs. Coolidge broke the tie by voting for the competing piece, which was by Ernest Bloch. According the the rules, only the winner had to be identified, but the judges were so taken with the sonata by the runner-up that they insisted on knowing the composer's identity, saying that the first prize winner was the work of a philosopher, and the runner-up the work of a poet.

"You should've seen their faces," Mrs. Coolidge recalled, "when they saw it was by a woman."

Clarke became well known as a violist and a composer and toured extensively during the 1920's and 30's. She was in New York when World War II broke out in Europe, and while stranded there, she resumed her acquaintance with a school mate from the Royal College, pianist and teacher James Friskin. In 1944, at the age of 58, she married him. Soon afterward, she gave up her career as a violist and before long also abandoned composing.

In later years, as her name was beginning to become known to a new generation of performers, Rebecca Clarke reflected upon her years of obscurity, saying "I never was much good at blowing my own horn."