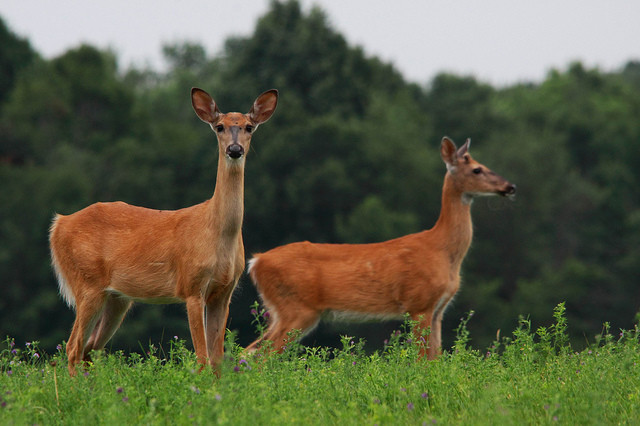 Wisconsin's deer population may soon increase in parts of the state due to the DNR management practices. Photo: NaturesFan (CC-BY-NC).

A new study has found that deer eating habits have had an extreme impact on other plant and animal populations in Wisconsin.

A team led by University of Wisconsin-Madison botany professor Don Waller decided to see how much damage is being done to other species by deer that are chewing their way across Wisconsin forests. The researchers revisited 62 sites in northern Wisconsin and Michigan that scientists had studied in the 1950s to see how much forestland had changed there. Then, Waller and others examined plant communities inside and outside 17 “exclosures,” fenced-in lots that let smaller animals in, but keep deer out.

Waller said that outside the fences, there have been major declines in populations of wildflowers like trillium, orchids and lobelias — “things most people enjoy in forests,” he said .

However, the respective populations of grasses, sedges, ferns and “weedy plants” have increased, according to Waller. Deer tend not to eat those species, and those plants also tend to resprout quickly.

Waller concluded that at least 40 percent of the change in species is due to deer.

“We asked: Does that change across the fence correspond to the changes we've seen across the whole region over 60 years? And this is what shocked us, that such a high proportion — at least 40 percent — of the overall changes in species abundance in the forest understory appeared to be due directly to the effects of deer,” said Waller.

Waller said where deer have caused less regrowth of trees, there could be a link to a decline in forest songbirds and harm to the soil.

Waller hunts deer and is not anti-hunting. but he recommends a change in deer management in WIsconsin.

“My big message for policymakers is we should follow some other states like Pennsylvania in basing our deer management on the habitat conditions that the deer are existing in,” he said. “Those habitat conditions are deteriorating. It’s a clear signal that we should back off on the density of deer we maintain.”

Waller said that instead of leaving deer populations down in Wisconsin after last year’s harsh winter and letting plant communities recover, the state Department of Natural Resources instead banned the hunting of antlerless deer in many northern counties, a move that should soon boost the number of deer. Waller said that Wisconsin forests are resilient, but have a limit.

The deer browse study is published in the journal PLOS ONE.