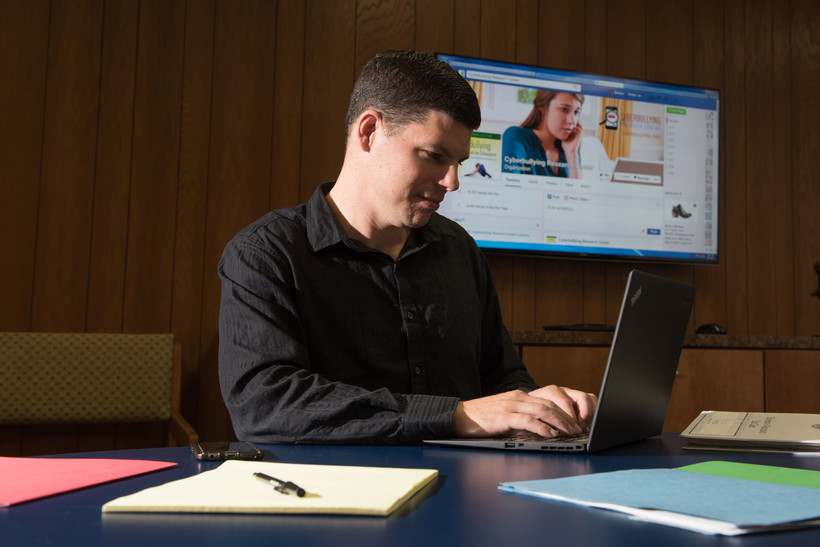 Research co-led by Justin Patchin, a professor of criminal justice at the University of Wisconsin-Eau Claire, focuses on the growing issue of sextortion among teens. Photo courtesy of UW-Eau Claire.

Study Finds 1 In 20 Teens Are Victims Of Sextortion

One in 20 middle and high school students are threatened with explicit pictures they share in confidence, and those victimized students also are more likely to make such threats, new research shows.

A study released last month from the Cyberbullying Research Center, co-led by University of Wisconsin-Eau Claire professor Justin Patchin, surveyed 5,500 students ages 12 to 17 from across the nation in 2016.

Five percent of those surveyed reported being a victim of this type of transaction dubbed sextortion, which can spur demands such as sexual acts, money or more images in exchange for not releasing the compromising image. Three percent said they threatened to share an explicit image, the findings show.

This is separate from the number of students who swap, share or receive sexually-explicit messages, sometimes referred to as sexting. Recent data show at least 25 percent of teenagers are receiving sexts and 1 in 7 are sending them.

This study, the first of its kind that quantified sextortion's impact on youth and provided a baseline number for how widespread it is, found boys and those who are non-heterosexual were more likely to be victims of sextortion.

Additionally, the aggressors were disproportionately more likely to have been victimized in the same way. Without data to show which event happened first, Patchin speculated that victimization occurs before offending.

"If you threaten me, then I'll threaten you, or if I'm the victim of sextortion, then I see this as maybe normative behavior, or at least tolerable behavior and so I'll threaten others," Patchin said.

That type of behavior isn't surprising, Patchin said, in part because the relationship between offenders and victims is established in other forms of bullying, both online and offline, he said.

"With sextortion, the desire of the aggressor is to get something of value," said Patchin, who teaches criminal justice.

But there aren't any laws that specifically address sextortion, Patchin said, noting that these actions are "shoehorned" into existing laws, whether they're related to extortion or blackmail.

For guardians trying to prevent their children from engaging in sexual abuse behaviors such as sextortion, Patchin said using threats of criminal prosecution doesn't actually work. Preliminary research shows instead that trusted adults, parents and teachers can have an impact by addressing this behavior and labeling it as inappropriate.

"If they're getting the same message from all of the respected adults in their lives, then it will be less likely for them to do it," Patchin said.

More studies are planned next year to establish consistency with the numbers retrieved from 2016. But Patchin said he's also hoping to explore the reasons why children commit these types of aggressions.

"While there's a lot that we don't know about victimization, there is hardly anything we know about the mindset of the person who would do this to someone else," he said.