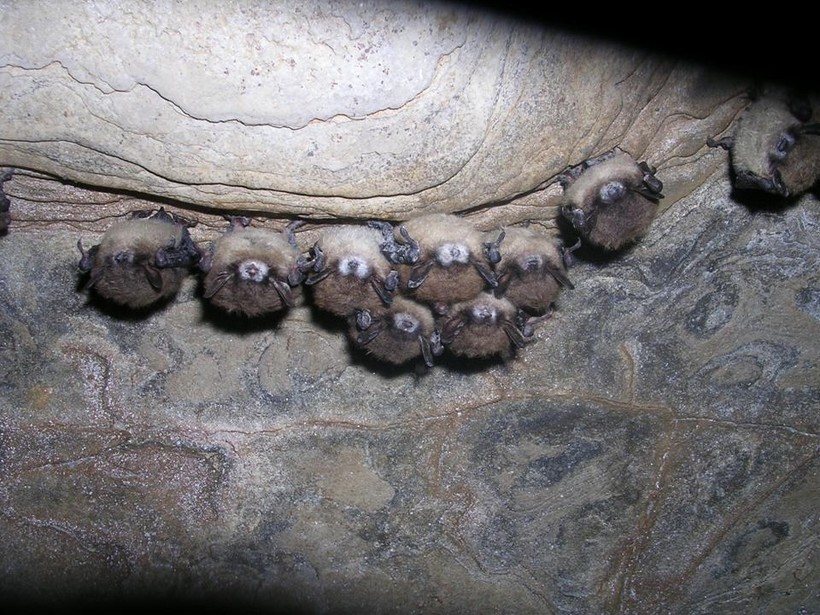 Disease Is Responsible For Millions Of Bat Deaths Across Country
By Chuck Quirmbach
Share:

A new study has found that the harmful effects of white-nose syndrome begin developing in infected bats even earlier than was previously thought.

The disease has killed many bats in other states, and it has now apparently arrived in Wisconsin, having been discovered in some bats in a cave in Grant County last year.

Some scientists had theorized that the fungus that causes the disease, Pseudogymnoascus destructans, leads bats to use too much energy during hibernation and starve. Researchers from the University of Wisconsin-Madison and Madison-based U.S. Geological Survey National Wildlife Health Center decided to test that energy depletion hypotheses. They worked in chambers designed to simulate certain cave conditions and compared the energy use of hibernating little brown bats with white-nose syndrome to the energy use of healthy bats.

Lead author Michelle Varant said by injecting the bats with small amounts of water and measuring the bats’ body composition before and after, the scientists were able to measure how much energy the animals used.

“The important part of our study, which was really interesting, was that we found bats used twice as much energy infected with WNS as the healthy bats hibernating in similar conditions,” she said.

Varant said that energy use began to increase even before some previously observed symptoms of the disease presented themselves.

“So before we saw any behavior changes in the bats, there was some disease process that was increasing their energy use,” she said.

Varant said the results are probably too late to help bats that already have white-nose syndrome, but that with additional research there may be a way to figure out more early steps to reduce bat deaths.

“So really acting on how to support bats as much as possible through protecting their habitat and minimizing disturbance within hibernation sites I think will give them the best chance of survival,” said Varant.

Increased survival will would mean more bats eating more insects, along with other possible benefits to Wisconsin ecosystems.

The study on white-nose syndrome is published in the journal BMC Physiology.