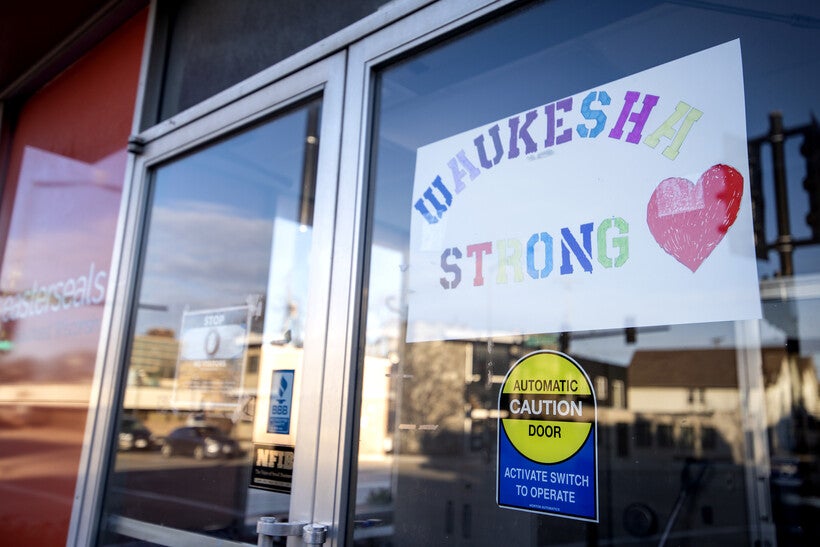 Children were among 6 killed, more than 60 injured at annual parade
By Madeline Fox
Share:

The School District of Waukesha has had more than 250 students take advantage of school counseling and psychological services on the district's first day of classes since a driver plowed through the Waukesha Christmas Parade last week.

"It's something that you never think you will have to hear or deal with," said James Sebert, Waukesha's superintendent. "What we are grateful for is the way the community has really come together."

Deputy Superintendent Joe Koch said it's been hard to quantify exactly how many of the district's students were injured or witnessed the event. Some students were back in class Monday with bumps and bruises, and the district was in touch with the families of students who were still being treated or at home recuperating from more severe injuries. Eight-year-old Jackson Sparks, the youngest person who died after the events at the parade, wasn't a student in the School District of Waukesha.

About 25 additional school psychologists, counselors and social workers from neighboring districts are supplementing Waukesha's usual staff of nearly 50 on Monday and Tuesday. Koch said the district will assess on Tuesday evening whether district staff will be enough to meet students' and teachers' needs moving forward, or if they'll continue leaning on staff from Pewaukee, Oconomowoc and other school districts.

"We know that kids are going to process this at different rates," Koch said. "Things will strike a memory, things will trigger a feeling, and we're going to want to make sure that we're there and able to support kids through the remainder of our school year."

The district canceled classes last Monday and Tuesday immediately following the incident to allow students time to process the tragedy, and was closed the rest of the week for the Thanksgiving holiday. Students and staff could still come to school buildings for counseling and psychological resources as well as free school lunches during the closure. Koch said some students did use those resources, though it varied by site.

He said the Waukesha South High School band came in for counseling last week. The group was one of several bands marching in the parade when 39-year-old Darrell Brooks drove his SUV through a barricade and into the parade route.

"We just find that the kids, especially teens, are much better when they're together," said Donna Bembenek, president of Catholic Memorial. "When they're home, we found that they were spending a lot of time on social media and watching the news, and we felt like we could support them most effectively in the building,"

Catholic Memorial always has its Crusader Day of Service on the Wednesday before Thanksgiving, and decided to go forward with the annual tradition last week. About 500 students and staff go out to volunteer at about a dozen Waukesha nonprofits, and cook a Thanksgiving meal to serve to the community on Wednesday night.

"We felt like service and helping others is a great way for kids to kind of find therapy, and find resolution to the experience they had on Sunday night," she said.

Bembenek said about 40 of her students and eight faculty and staff members were marching in the parade, and more were watching with their families or had younger siblings or students in the parade.

She said the outpouring of support for her school community, and from within the school community, has been staggering. An alum who works with therapy dogs brought some onto campus last week to visit students and staff. Other alumni have donated to GoFundMe pages, written cards and letters, and prepared meals for the families of students who are still in the hospital or recovering from injuries.

"The widespread support within the Waukesha community, from everybody, has been so inspiring, from parents and students and alumni reaching out and wanting to help," she said. "We want to make sure that we're still here in the weeks and months ahead when maybe this isn't a news story anymore, but the families still need help – and Catholic Memorial will continue to be here to provide that help."

Bembenek said Catholic Memorial didn't give any tests or assessments when students came back to school last Tuesday, and instead focused on bringing students together. Moving forward, though, she said the school will be mindful of students' needs around schoolwork.

"Some students might need more time to do assessments or assignments or projects as a result of this," she said. "For some students, interesting enough, if they're prepared and ready for a test that was scheduled on Tuesday, and you say to that student, you don't have to worry about that test until Monday, that by itself creates more anxiety than allowing that student to take that test on Tuesday, so you really want to be understanding of where students are, and meet them where they are."

Koch, with the Waukesha school district, said academic accommodations for students who are struggling to engage in school because of trauma from the parade are being considered on a case-by-case basis.

"Our general message this week is, let's come together, let's take care of each other," he said. "There's a sense of normalcy around just showing up to school, going to first period, second period, having lunch with your friends — we want to get the kids back into that routine first, then we'll get to the academics down the road."