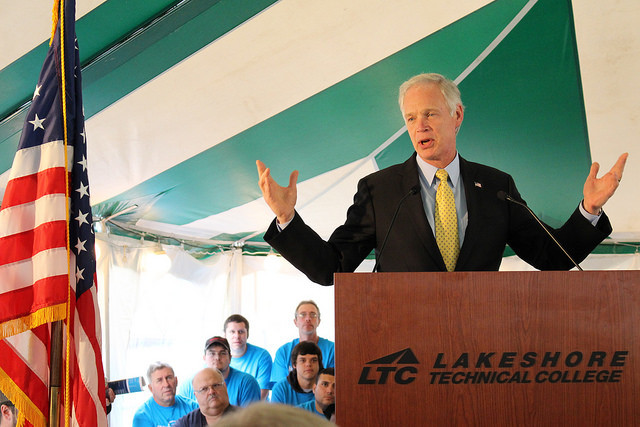 Students Can Avoid Crippling Debt If They Explore Their Options, Says Sen. Johnson

Wisconsin U.S. Sen. Ron Johnson is not buying into his Democratic counterpart's plan to make tuition free at certain colleges.

Under a bill introduced earlier this month by Sen. Tammy Baldwin, two-year public colleges, technical colleges and tribal colleges would become free to students. The federal government would pay for 75 percent of the cost and states would pick up the remaining 25 percent, though they could opt out.

Baldwin renewed her call for the plan Thursday. She said the average debt load for a four-year Wisconsin student is $28,000. Under her plan, Baldwin asserted, full-time community college students could save an average of $3,800 a year.

"I just really believe that every student deserves the opportunity to gain the skills and knowledge that they need to succeed in the 21st century economy without drowning in debt," she said.

The America’s College Promise Act of 2015 would cost more than $79 billion over 10 years, which doesn't sit well with Johnson.

He cited a study released this month by the Federal Reserve Bank of New York that said that for every new dollar received in Direct Subsidized Loans, tuition goes up by 65 cents.

"As well-intentioned as these programs are, by enticing our children to incur, I think collectively $1.2, $1.3 trillion of student loan debt, we have actually made college less accessible, because we’ve made it less affordable," Johnson said.

Johnson said the solution is to give students and their parents information on "all the options" after high school — two-year degrees, technical colleges or even going out in the work force.

Johnson said there are "tens of thousands" of manufacturing jobs in Wisconsin that are not being filled, so high school graduates can opt for one of them. As the chief executive officer of a polyester and plastic manufacturing company called PACUR, Johnson said he would pay for students’ continuing education.

"We need to kind of break out of, you know, this paradigm where we’re saying everybody has to get a four-year degree. It’s just not the case," he said. "There are plenty of options. Students should explore those options."