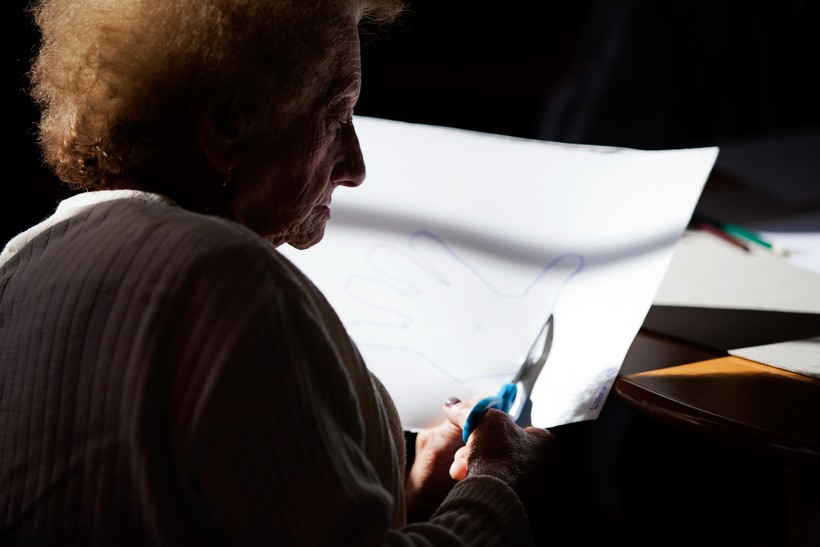 In her work with older adults living at Chai Point Senior Living in Milwaukee, Erin Whitney doesn’t just try to spur residents’ memories, she tries to stretch their brains while talking about their day and being crafty.

Whitney, an arts education major at the University of Wisconsin-Milwaukee, is part of the nonprofit group Creative Trust Milwaukee and its student artist-in-residence program.

Whitney facilitates arts programming, such as shaving cream snowmen and mosaic gardening pots, and she hopes to start a gardening program in the summer. But the residency is about much more than just planning activities for residents. It’s about building intergenerational friendships she wouldn’t otherwise.

"When you’re living there, these are your neighbors, and so your life and their's kind of dwell together," Whitney said. "So even if you don’t have an activity that day or a workshop, you’re still running in and seeing what’s new," with the residents, Whitney said.

The artist-in-residence program was designed by Anne Basting, a theater professor at UW-Milwaukee's Peck School of the Arts, which facilitates Creative Trust Milwaukee. Basting's name may sound familiar, because she was awarded a MacArthur Genius Grant in September for her work with older adults after developing a program using images to prompt storytelling with adults suffering from cognitive disabilities.

Two other UW-Milwaukee students in the program are embedded in senior communities aside from Whitney, who has been a student artist-in-residence at Chai Point since August.

Ian McGibbon, an arts education major, is in his third semester as an artist-in-residence at Eastcastle Place retirement home in Milwaukee. Thorin Ketelsen, a theater major, is living at Luther Manor in Wauwatosa. Two other students facilitate arts programming at senior centers but aren’t living there.

McGibbon said his schedule varies week by week because he’s a full-time student and also has a job.

"It’s not every week, but we’ll plan activities or field trips to galleries around town," he said. He especially likes taking residents to Union Art Gallery at UW-Milwaukee.

"Just getting them onto the campus, some of them actually went to school there, were professors there, and seeing their excitement of being in the place again is really cool," McGibbon said.

Whitney said she thinks it’s a common misconception that younger and older generations don’t have interests in common, and that prevents great relationships from forming.

"Maybe some people don’t know or don’t think that older people are curious, but they are so curious, and I think we should be too, because they have really awesome stories to tell," McGibbon said.

Rusty Tym and Joyce Heinrich live at Luther Manor in Wauwatosa, where Ketelsen is the artist-in-residence.

Both Tym and Heinrich are enthralled by the program and said it’s been great having Ketelsen around.

"It was instant friendship with all of us," Tym said. "We just look forward to every Sunday afternoon when he teaches the storytelling and creative writing class, and gives us something to think about throughout the week," Heinrich said.

Like Whitney and McGibbon, Tym and Heinrich said they value intergenerational friendships, which having a student living within the community clearly fosters. That kind of relationship benefits both parties.

"I always take umbrage to that word, 'isolation,' because we don’t feel that way. We don’t feel confined," Tym said. "It’s not a cloistered community, it’s a doors-open community," and the relationship he and other residents have with Luther Manor’s student artist underscores that point.