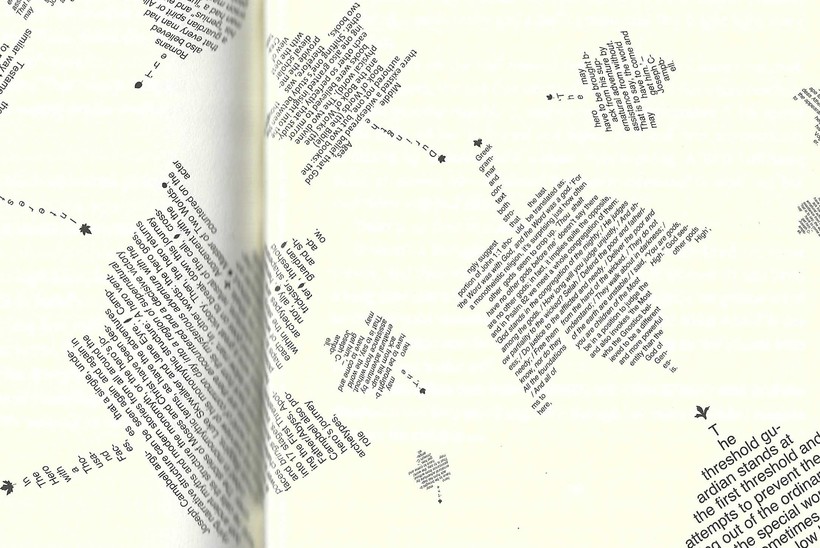 The Novel Explores Uncharted Territory In The Vein of 'The Raw Shark Texts'
By Doug Gordon
Share:

Steven Hall made a huge splash in the book world with his debut novel, "The Raw Shark Texts," which was released in 2007. The New York Times Magazine described it as "a genre-founding work of fiction."

The title intentionally sounds like "The Rorshach Tests," the psychological ink blot tests used to identify mental illness. The book earned comparisons to Philip K. Dick and Haruki Murakami, as well as the movies "Jaws" and "The Matrix."

Hall continues to explore more uncharted territory in his new novel, "Maxwell's Demon." It has a similar vibe to Christopher Nolan's 2010 film, "Inception."

Hall's wizardry with words and his obsession with big ideas like entropy and thought experiments will probably have you questioning reality. And that's not necessarily a bad thing.

"It's about a failed novelist whose father was very successful and his feelings of being replaced in his father's affections by his father's assistant, who is also a successful novelist," Hall told WPR's "BETA." "And when we meet the protagonist, he's kind of languishing at home on his own and he gets a series of strange messages. The first one seems to be an unspoken message from his father, despite his father having died seven years before."

The failed novelist, Thomas Quinn, then receives a letter from his father's protégé, Andrew Black. Black wrote a very successful best-selling whodunit called "Cupid's Engine" and then disappeared. The enveloped contains a Polaroid photo and a folded note. The photo looks like a black sphere with a small bit of light touching the sphere's left side. The note is handwritten and reads:

What do you think this is?

Hall took the title "Maxwell's Demon" from a thought experiment dealing with entropy, thermodynamics, and the idea that entropy can only be decreased by applying energy. This results in some mysterious connection between entropy and time that most don't quite understand. Physicist James Clerk Maxwell proposed the hypothesis in 1867.

"Time can only flow forward because things are tighter in the past and messier in the future," Hall explains. "Maxwell's demon is a very simple little thought experiment that shows that under the right circumstances, if a creature in the right place knows what it's doing, it seems to be possible to reverse entropy and therefore to reverse time."

So how does Maxwell's demon, the thought experiment, relate to "Maxwell's Demon," the novel?

"It relates in terms of the themes of the novel, in terms of putting things right that have come apart, or finding a way to move back to a state of being that was before some kind of decay or entropy," Hall said. "In the plot, it also seems at several points that maybe Thomas has lost a day and arrived somewhere the day before he left, although we don't know whether that's really true or someone is messing with him."

Hall says his novel is concerned with tricks that stories tell. One of the tricks he identifies is: "The writer is setting the pace for the reader to travel at, but the writer does not travel at that pace."

"What I'm talking about is that a book is written for the speed the reader reads. So you're constantly working through, and you're reading what you've written back at the speed the reader would read it in the book," Hall explains. "Actually, the writer's taking 10 times the time that you're taking to read that paragraph to write it, maybe much more. It comes back to time and entropy — that when you're going through a book with a writer, you have this weird idea that the writer is actually aging 10 times faster than you as you are moving through the text. As he did in "The Raw Shark Texts," Hall makes tremendous use of interesting typographical elements that resemble concrete poetry in "Maxwell's Demon." Most of them are in the shape of leaves (for example, the image at the top of this article).

Hall says he likes to do this because he is interested in "that contrast between what we imagine as we read, versus what we're seeing."

"I'm quite a visual reader, so I find myself setting a scene on the stage and putting characters in it. And it's almost like I'm looking at the page and reading. I'm kind of seeing this film in my mind. And I know some people aren't that sort of reader, but I think a lot of people are."

Hall chose an epigraph from Stephen King's time travel novel, "11/22/63." He says he chose the quotation because it encapsulates the aim of his novel in the most beautiful possible writing.

Stephen King includes Hall's "The Raw Shark Texts" in the reading list of his book, "On Writing: A Memoir of the Craft." If Hall were to write a book about writing, what would be the most important advice he'd give?

"There are so many things to say. I think the really important thing to do is always try and put yourself in the shoes of the reader to learn the skill of going back through the text and reading it as though you don't know it. And allowing yourself to trip up and allowing yourself to kind of be confused and sort of separate what you know from what's on the page, which is a technical skill. It's so important, you have to kind of get out of your own head and allow yourself to be a little disappointed with what you've tried to do."