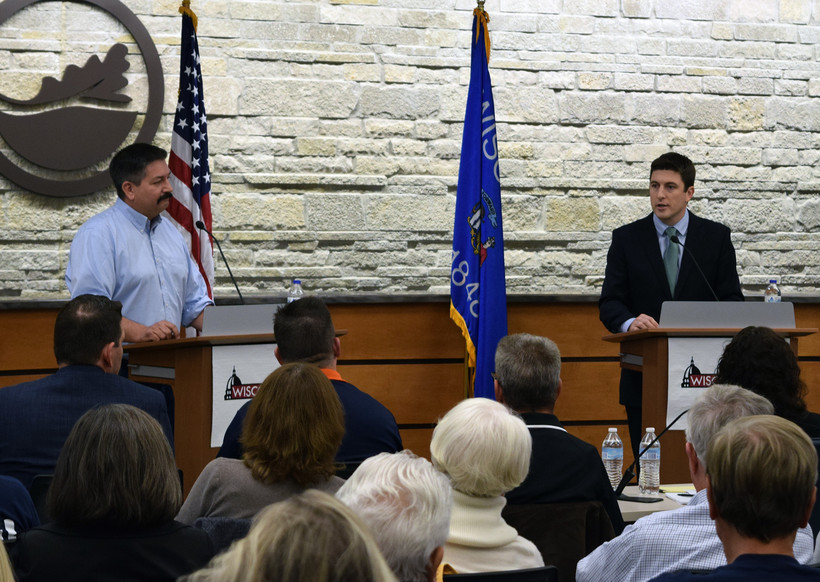 The candidates for Wisconsin's 1st Congressional District spent Friday evening facing off in a sometimes feisty debate in Oak Creek accompanied by vocal supporters on both sides.

Steil, an attorney for a manufacturing company and University of Wisconsin System regent, cast himself as a political outsider who would bring business experience to Washington, while Bryce, an ironworker and former union organizer, said he's running to champion the concerns of working families.

Both candidates emphasized what they said was a clear choice between them — including on a personal level — and their differences were on display in exchanges that occasionally became testy.

"It just blows my mind, again, listening to a corporate attorney who helps outsource jobs from Wisconsin to other countries talk about good-paying jobs here," Bryce said at one point while discussing employee training in the state.

"I just find it a bit ironic how much you harp on the word 'attorney,'" Steil shot back. "I can think of at least nine times where a law degree would have come in really handy," he said, referring to Bryce's record of nine arrests.

In terms of policy, the two drew contrasts between one another on issues ranging from Social Security to foreign policy to the federal deficit. But health care, which has been a defining issue in the campaign, was a major recurring theme Friday night.

Bryce, who supports the Medicare for All policy, said it would make health care more affordable for consumers and argued it would also be more cost-effective in the long run for the country than the current system.

Republicans have held the seat for two decades under Ryan, who has endorsed Steil, a one-time staffer for the House speaker.