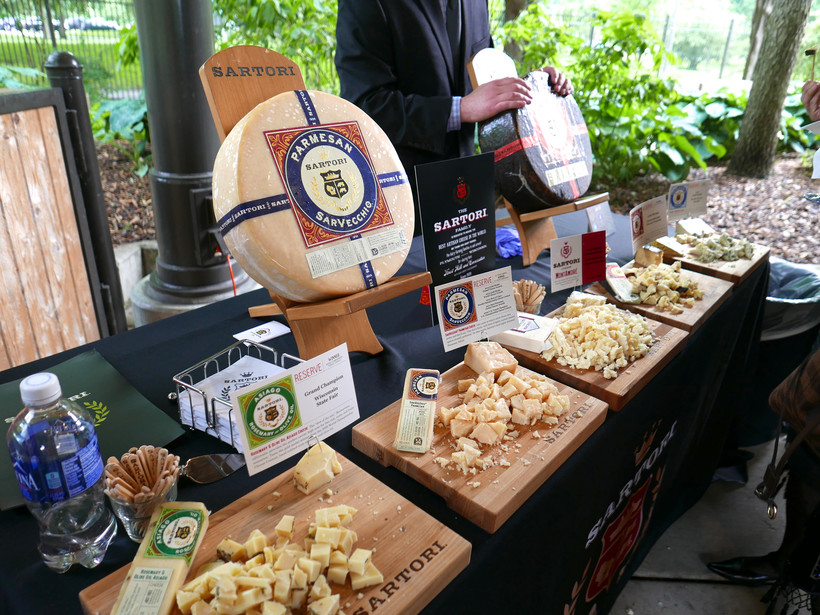 Sartori Cheese president Jeff Schwager said the company has negotiated with Mexico to split tariffs imposed on the dairy industry in retaliation for the U.S. approving steep tariffs on steel and aluminum. Lou Stejskal (CC BY)

With the recent announcement of retaliatory tariffs by neighboring countries in response to President Donald Trump's duties on steel and aluminum, companies closer to home are looking for creative ways to spare relationships with importers that could be in jeopardy.

Jeff Schwager, president of the Plymouth-based cheese producer Sartori, said the company has negotiated with Mexican customers and importers to split the 25-percent tariff increases in half to help minimize cost for Mexican consumers. Mexico is one of Sartori's top buyers, comprising about a quarter of the company's export market.

"That means that business that was profitable to us is now break-even at best," Schwager said.

Although the company is splitting the tariffs in half with their Mexican brokers and distributors, Sartori's vice president of marketing, Blair Wilson, said it's more prudent to lose money now than to sever relationships that the company has built over time.

"In the short-term perspective, it might be better to lose now so in the long-term we can stay viable," Wilson said.

While a few cheese producers statewide have adopted plans to split tariff costs, executive director of the Wisconsin Cheese Makers Association John Umhoefer said he's heard of other cheese companies lowering the price of their products so that the final cost with the tariffs represents the former cost for the markets they're selling into.

Umhoefer said losing established partnerships is a bigger concern for his organization's members, which number around 500 members from 100 companies in 19 states. That's because other nations such as New Zealand, Australia and the European Union and poised to jump in on troubled markets, he said.

"Once you shift distribution patterns and set up the complexity of importing, it's easier to continue to do what you're doing," he said, noting that importers might not return to U.S. producers after establishing relationships elsewhere.

That loss of partnerships could prove costly, even if these tariffs only last for a short period of time, said Mark Stephenson, a University of Wisconsin-Madison expert of dairy policy analysis.

"If they've spent time building relationships in Mexico, there's been trust and you're very hesitant to give that up quickly and easily," Stephenson said. "You might be willing to sell the product at a loss if you think this is a relatively short-term phenomenon. It's a means of expressing good will to each other, too."

According to a news release from the Wisconsin Cheese Makers Association, about $50 million worth of Wisconsin cheese reached Mexican consumers last year. That's more than one-third of all the exported cheese for the state in 2017.

The WCMA is one of 60 companies that wrote to the Trump administration urging it to rescind the tariffs on steel and aluminum, the association joined the call in hopes of ending retaliatory tariffs from the EU, Mexico, Canada and China that are now impacting the dairy industry.

"Dairy has become mired in that issue," Umhoefer said. "Our industry is asking tariffs be taken away."

State Secretary of Agriculture, Trade and Consumer Protection Sheila Harsdorf said while she supports fair trade, the dairy market is being hit at a time when commodity prices have been low. Milk prices per hundredweight, or 100 pounds are at about $17, a steep decline from 2014 when dairy farmers were receiving $25 for the same amount.

"The challenge is we can't take any more pain," she said.

Compounding the problem for cheese producers is that the EU has built provisions into trade negotiations with Mexico that restrict cheese sellers such as the U.S. from using certain names on packaging if those names refer to a region in Europe. For example, Sartori can't sell Parmesan in Mexico by that name. Instead, they sell it as "Parmesano."

Instead of Asiago, the company sells the cheese as "Sartiago," and have since seen a 30 percent reduction in sales.

"The consumer doesn't know what that is," Schwager said.

Harsdorf urged cheese producers to continue expressing the impact of these tariffs and the importance of fair trade to the Trump administration.

In the meantime, Harsdorf said that the department is planning "reverse buyers missions" this fall to help introduce potential global buyers to the state's products to "showcase their quality."  She's hopeful that such an invitation will help expand current markets.