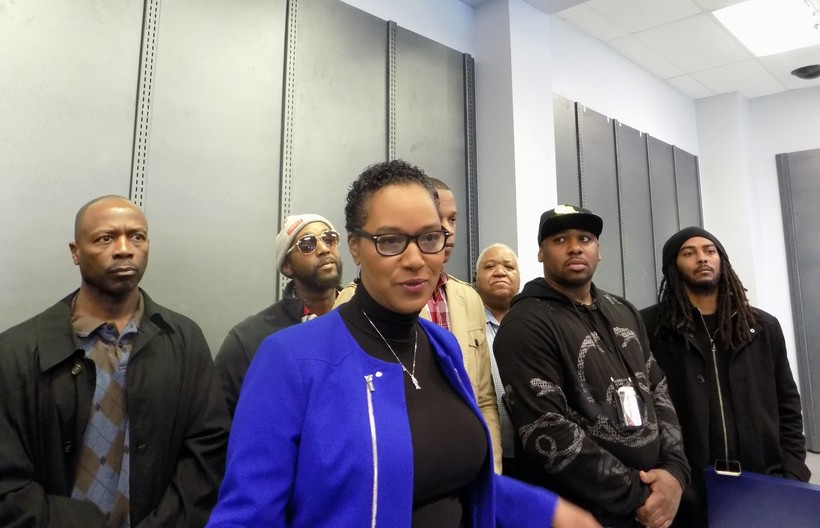 State Sen. Lena Taylor with supporters behind her. Ximena Conde/WPR

State Sen. Lena Taylor, D-Milwaukee, says she plans to remain in office despite weeks of scrutiny over her behavior in and outside of work. Most recently, she lost her position on the Joint Finance Committee on Tuesday following an employee complaint and subsequent investigation that found she had bullied staff.

At a Milwaukee press conference where about a dozen of her supporters stood behind her, Taylor addressed the report citing the difficulties of being a black woman in a position of authority. She also reiterated previous statements that the staff complaint came from a disgruntled employee.

"If you say that telling someone to show up for work and that they need to do their work is bullying — if that’s what you say that that is — if you say being direct and telling people what expectations are, then so be it," Taylor said.

Still, state Senate Minority Leader Jennifer Shilling, D-La Crosse, said in a statement Tuesday, that employees should be able to work in a safe working environment, and requested Taylor's removal from the committee.

Sen. LaTonya Johnson, another Milwaukee Democrat, has since replaced Taylor on the budget-writing committee.

Taylor also used her press conference to address a late-April incident at a Wells Fargo bank where she was cited for disorderly conduct during a personal banking transaction.

The senator admits calling a bank teller a "house negro" but says Milwaukee police and the media have exaggerated the incident by calling her comments a racial slur, reporting she used the "N-word."

"She does too much work, too much good work, for anyone to come in here with something so petty and attempt to make a circus of it by all the media and all the reporting," said Michael Kemet, one of Taylor’s constituents who attended the press conference.

Another supporter and community activist, Frank Nitty, says he’s frustrated Taylor and the incident at a bank are making national news when Milwaukee has other issues that merit national attention, like its lead problem.