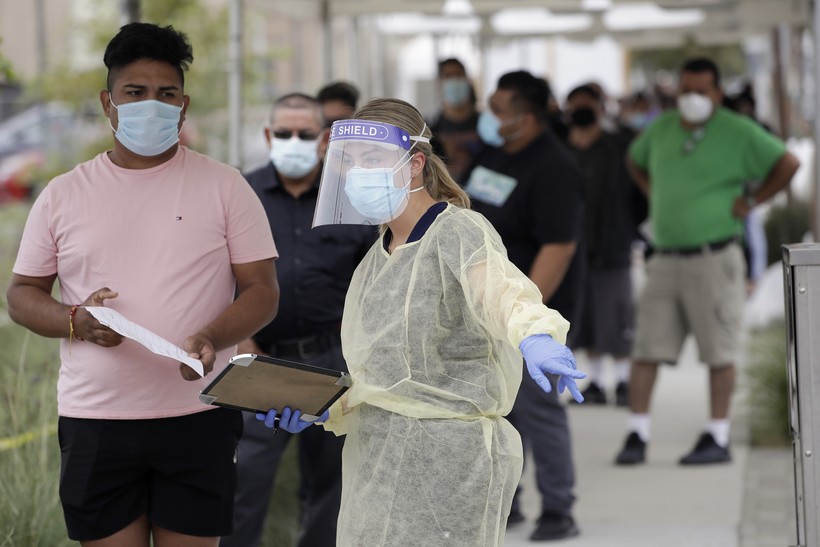 People line up behind a health care worker at a mobile Coronavirus testing site at the Charles Drew University of Medicine and Science in Los Angeles. A technical problem has caused a lag in California's tally of coronavirus test results, casting doubt on the accuracy of recent data showing improvements in the infection rate and number of positive cases, and hindering efforts to track the spread, the state's top health official said Tuesday, Aug. 4, 2020. Marcio Jose Sanchez/AP

Fox Valley Region Continues To Be Hot Spot In US
By WPR Staff
Share:

Wisconsin saw fewer new COVID-19 cases on Sunday than previous days. But in the Fox Valley region, the number of new cases continues to climb, according to the latest data published by the state Department of Health Services.

There were five new deaths from COVID-19 reported Sunday. On Sunday, 8,950 people tested negative in Wisconsin.

17.1 percent of people who got tested for COVID-19 over the past week were positive for the disease, according to DHS. That rate has been on the rise.

On Sept. 30, DHS also introduced an alternative positivity rate, one that measures the percentage of tests that are positive, instead of the percentage of people who get a positive result. The new metric takes into account people who have been tested multiple times. The seven-day average for that number is at 9.1 percent.

According to DHS, there were 692 COVID-19 patients hospitalized as of Oct. 3. A total of 7,646 people have been hospitalized because of the disease, or 5.8 percent of all positive cases.

The latest figures bring the overall total of positive cases in Wisconsin to 132,663, according to DHS. A total of 1,377 people in Wisconsin have died from COVID-19.

As of Sept. 30, the Fox Valley region of the state had the most new cases per capita over the previous two weeks, while the North Central region saw cases rise most rapidly.

Wisconsin's daily testing capacity — based on the availability of test supplies and adequate staffing — has grown from 120 available lab tests in early March to 39,234 as of Sunday. The number of actual people with new test results reported Oct. 4 was 10,815.

Editor’s Note: WPR has updated the language it uses in its daily coverage of COVID-19 statistics to clarify the distinction between COVID-19, an infectious disease, and the coronavirus (SARS-CoV-2) that causes that disease. WPR's daily coverage also no longer includes the Badger Bounceback Plan, which DHS has stopped updating.