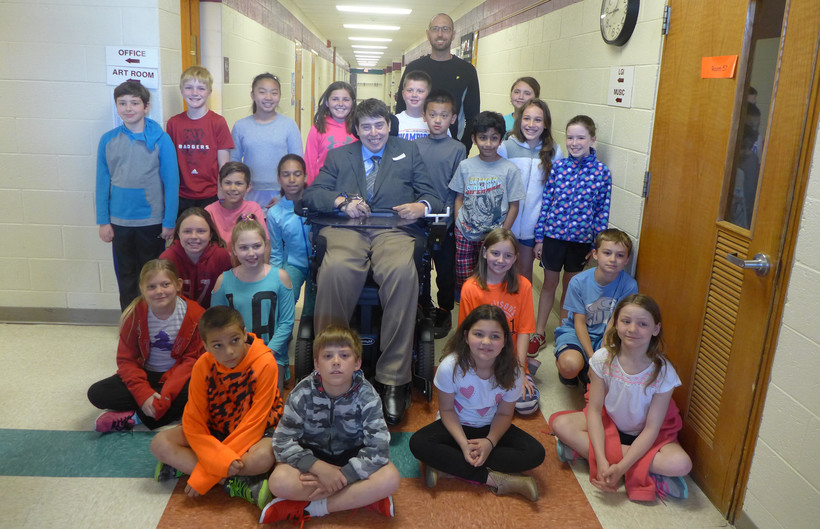 State Rep. Jimmy Anderson, center, with Cottage Grove Elementary School students in a visit to the school in May 2017.

Rep. Jimmy Anderson, D-Fitchburg, is doing one of those cliché, bread-and-butter lawmaker things. He’s visiting an elementary school in his district.

He parks his wheelchair in the doorway of an art classroom and observes as a class of very serious-minded elementary school students focus on a project involving trees and seasonal colors.

Prompted by their teacher and the small gaggle of adults traveling with Anderson on his tour, the students ask the lawmaker about his work in the Capitol.

One student chirps, "What do you do for your job?"

Anderson, pale and freckled with a boyish face, cracks a small smile.

Anderson suggests he could write a law that would require their parents to let them have later bedtimes. The kids giggle.

During his visit in May to Cottage Grove Elementary School, none of the students ask why Anderson is in a wheelchair. And he’s OK with that.

When he was sworn in in January, Anderson said he didn't want to be known as the lawmaker in a wheelchair, the go-to guy for bills about disability rights.

"There are people that are probably not disabled that know more about disability rights and disability issues than I do," Anderson said. "So to think that just because I sit in this chair that I know all about the issues can sometimes be a little offensive."

He said when he started this job, he wanted to talk about environmental issues, education or tax policy, which he studied at the University of Wisconsin Law School.

Even though he doesn't want people to focus on his disability, or the accident that caused it, Anderson will talk about it. He’s told the story in interviews, at at least one press conference since he took office and on the Assembly floor.

The story is that, when Anderson was 24 years old, a drunk driver hit the car carrying his whole family just outside their small California hometown. The crash came back to him in pieces in nightmares, he said.

Anderson, now 30, remembers being hit, the rolling car smashing into palm trees, and hanging upside down in his seat, his body "on fire."

The crash killed both of his parents and his 15-year-old brother. After the car stopped rolling, Jimmy remembers looking over at his little brother next to him.

After the accident, medical bills piled up, and Anderson was nearing the lifetime spending limit on his insurance. He said he thought his life was over. Then he was notified that part of the Affordable Care Act kicked in, and lifetime limits were gone.

He told that part of his story during a speech on the Assembly floor in June.

This summer, as Congress mulled a possible repeal and replacement of the Affordable Care Act, Wisconsin Democrats held town halls about health care reform. Anderson shared his story at those events and, according to his staffer, Logan Vidal, it touched a nerve.

Constituents who heard Anderson talk about his experience wrote and called his legislative office. They wanted him to keep telling it, because they had similar experiences with health care and insurance.

"We had so many of those stories, it was like, we have to talk about this," Vidal said. "Not just from a we-think-this-is-going-to-help-us-achieve-our-policy-goals (perspective), but our constituents are literally yelling at us, telling us to do this."

Anderson said that feedback opened his eyes. So he told his story more.

"I do know that people in the community turn to me to be their voice because I’ve lived their life, I understand their experiences," he said.

"And so it’s important for me to be the best wheelchair legislator I can be," he said.

At the same time, he hopes people will realize that’s not all he is.