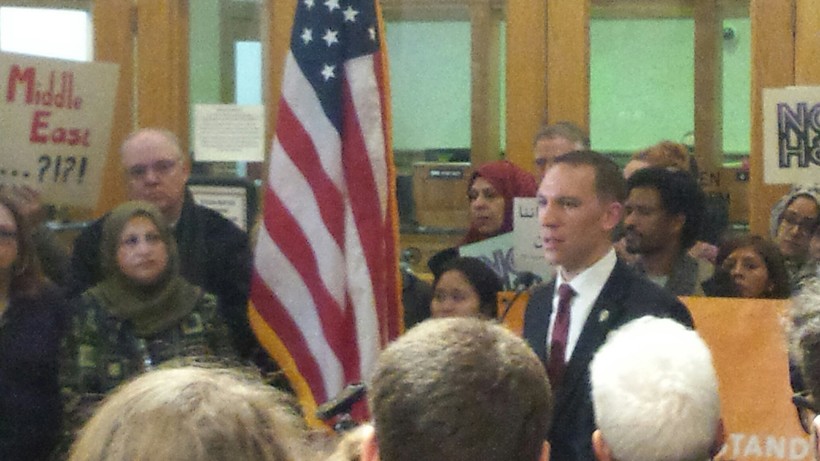 Democratic state lawmakers have introduced a resolution asking the Legislature to denounce Islamophobia and hate in Wisconsin.

The effort comes in the wake of nationwide protests over President Donald Trump's temporary ban on admitting most travelers from seven majority Muslim countries into the U.S.

Milwaukee legislators, state Sen. Chris Larson and state Rep. Jonathan Brostoff authored the resolution. They say it condemns all hateful speech and violent action directed at Muslims, those perceived to be Muslims, immigrants and people of color. Brostoff said Trump's executive order is a Wisconsin issue.

"The only thing it takes for tyranny to take over is for good people to do nothing when it's happening," he said. "These sort of attacks are not welcome in Wisconsin. They're not our values and don't represent us."

A multi-cultural coalition endorsed the resolution at a Milwaukee news conference on Tuesday. Ahmed J. Quereshi  of the Islamic Society of Milwaukee was among those who spoke.

"This resolution would be a clear repudiation of anti-Muslim hate and bigotry, and would send a strong message to those who seek to promote fear and division in our nation and state," Quereshi said.

The FBI reported late last year a surge in attacks against American Muslims, as part of an increase in overall hate crimes.

The Trump administration says the freeze on most immigration will give the U.S. a chance to review and improve security.

Correction: The original version of this story misidentified the person in the photo. The photo is of state Sen. Chris Larson and the caption has been corrected.