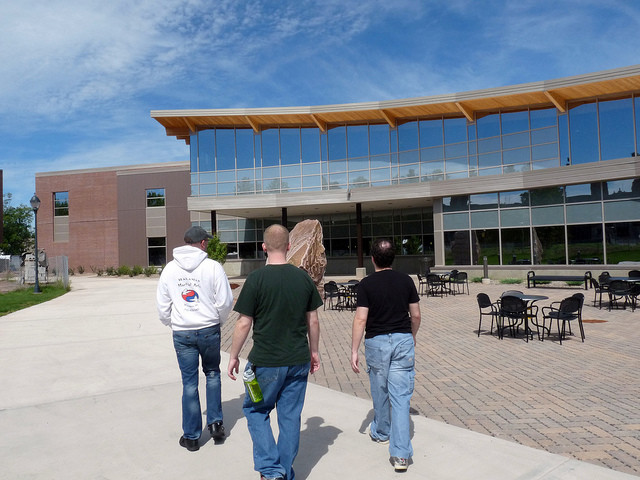 The UW-Superior campus, where campus administrators are in the process of outsourcing various campus services. Photo: Adelie Freydja Annabel (CC-BY-NC-SA).

A member of the Assembly Colleges and Universities Committee says there’s a real danger the University of Wisconsin System will follow UW-Superior’s lead and privatize services and even faculty.

UW-Superior privatized its campus bookstore on July 1. It also sent “at-risk” notices to 26 of its grounds and custodial crew members, which means they might get a two-week termination notice at any time. In mid-July, the campus will request proposals from private companies to take over those jobs.

UW-Superior would become the first four-year campus to outsource those positions. The chancellor there, Renee Wachter, says other services, from campus police to information technology, could also be farmed out.

“If they’re able to do that in Superior, the other campuses are watching and they’re going to be taking notes,” she said. “What are we going to be going to next? Privatizing teachers at UW System?”

Hesselbein said this targets the lowest-paid campus employees, and that all pay increases and bonuses need to be evaluated.

“It’s a huge problem when the legislature and governor keep taking funds away from our colleges and universities,” she said. “What are they supposed to do? The tuition freeze was something that can help some students, but what are the colleges to do in order to meet the demands of the students who are there?”

Hesselbein has written a letter to UW System President Ray Cross, asking him to intervene so UW-Superior staff keep their jobs.