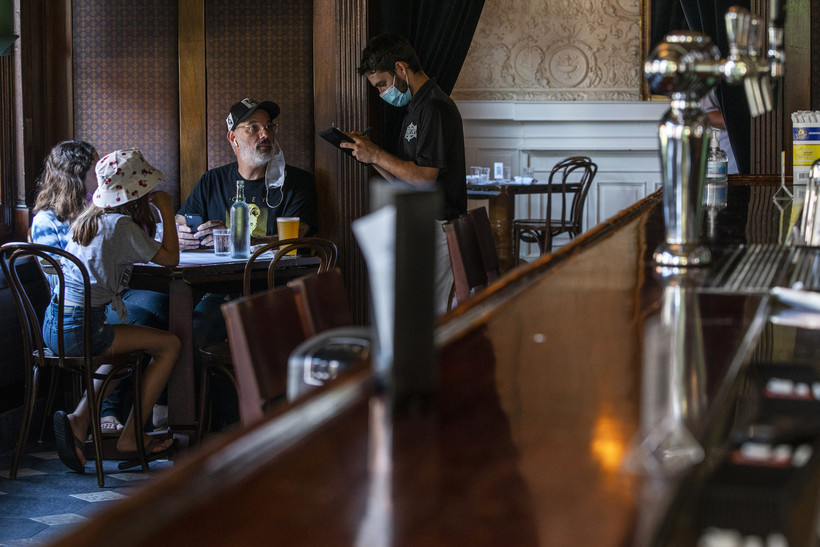 A waiter in a face mask takes the order of customers inside a local restaurant during lunch during the coronavirus pandemic on Friday, Sept. 4, 2020, in Hoboken, N.J. Eduardo Munoz Alvarez/AP Photo

DHS reported 567 new cases of the virus on Monday, bringing the average for the past seven days to 880 daily cases.

It's typical for the DHS to report lower numbers of COVID-19 cases on Mondays. Since the start of the pandemic, there have been 13 weeks in which Mondays are the weekday with the lowest case totals. One week ago, the average was 678 daily cases. Daily new cases have been rising since last weekend.

The latest figures bring the overall total of positive cases in Wisconsin to 81,760, according to the DHS. A total of 1,168 people in Wisconsin have died from COVID-19, with zero new deaths reported on Monday.

According to DHS, 10.4 percent of all test results reported on Monday were positive for COVID-19, bringing the overall percentage of positive tests over the past seven days to 10.2 percent. The previous seven-day period's test-positive rate has been rising  since Aug. 31, when it was 8.2 percent. The percentage of positive cases is often read by public health officials as a measure of overall testing levels. A high rate could indicate that testing in the state is limited, and skewed toward those already flagged as potentially having the virus. A lower rate could indicate testing is more widespread.

Wisconsin's daily testing capacity — based on the availability of test supplies and adequate staffing — has grown from 120 available lab tests in early March to 27,080 as of Monday. The number of actual people with test results reported on Monday was 5,466.

Public health officials are concerned that the start of the school year, both at university campuses and K-12 schools across the state, could increase community transmission of the disease. There are other factors that could contribute as well. Wisconsin's five Catholic diocese announced last week that they would lift the suspension of Sunday mass.