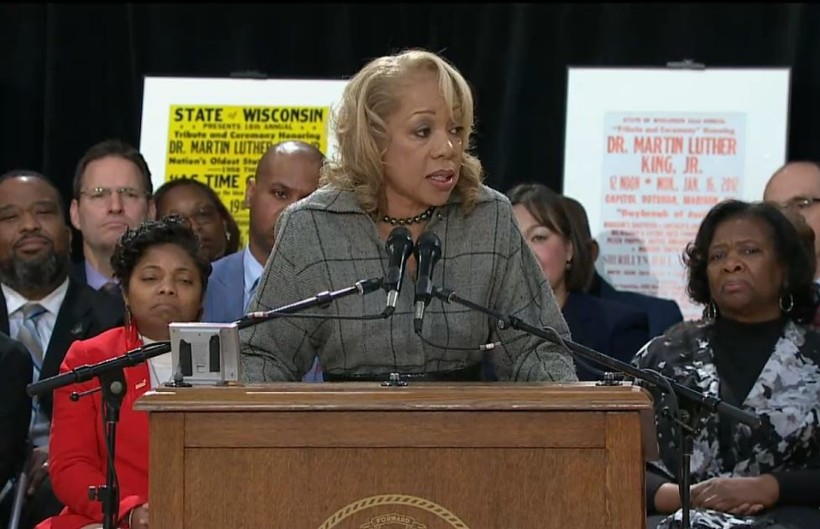 Wisconsin held its annual commemoration of Dr. Martin Luther King Jr at the state Capitol on Monday. The theme of this year's event was "truth is marching," and the noontime celebration heralded the contributions of women throughout history.

The 39th annual tribute and ceremony, which mixed various musical performances and speeches, reflected on King's legacy and its enduring relevance for today's generations. Gov. Tony Evers, Lt. Gov. Mandela Barnes and state Superintendent of Public Instruction Carolyn Stanford Taylor were among those present at the ceremony.

The celebration also featured remarks recognizing the recipients of the 2019 Wisconsin MLK Heritage Award, both of whom were female. One was Patty Loew, a professor and director of the Center for Native American and Indigenous Research at Northwestern University. Loew is a member of the Bad River Band of Lake Superior Ojibwe and authored the book, "Native People of Wisconsin," which is used by many schools as a social studies textbook.

The other recipient was Sandra Parks, 13, of Milwaukee, who received the award posthumously. She died days before Thanksgiving after being struck by a stray bullet. Parks's mother, Bernice, accepted the award on her behalf.

"It's been a long journey," Bernice Parks told the crowd. "It's very hard."

In 2016, her daughter won third place in a Dr. Martin Luther King, Jr. writing contest held by Milwaukee Public Schools. Her essay, titled "Our Truth," concerned gun violence. The world, she said, had failed to live up to King's famous dream of civil rights, racial integration and equality.

"Sandra's a blessing," said Bernice Parks. "She was a blessing to me when I first got her, when God gave her to me. She's going to continue to be a blessing upon all of us, in y'all thoughts, in y'all writing."

Parks said that she is planning to publish a book of Sandra's poems, which she wrote while a student at Keefe Avenue Middle School.

The ceremony's keynote address came from Rita Coburn, a Peabody- and Emmy Award-winning director, writer and producer. Coburn celebrated women -- from Rosa Parks to Mamie Till -- for, in Coburn's words, "turning moments into movements."

"As women, I want to encourage you to by all means grow tired of what is wrong in our society. Your tiredness creates some of the best boots and heels on the ground," Coburn said. "It is not fatigue. It is an indication that you have the ability to change the world."

Coburn also challenged each listener to reflect on their personal actions.

The long-running ceremony is produced, directed and hosted by Wisconsin Public Radio's Dr. Jonathan Overby. It's the oldest state celebration in the country.