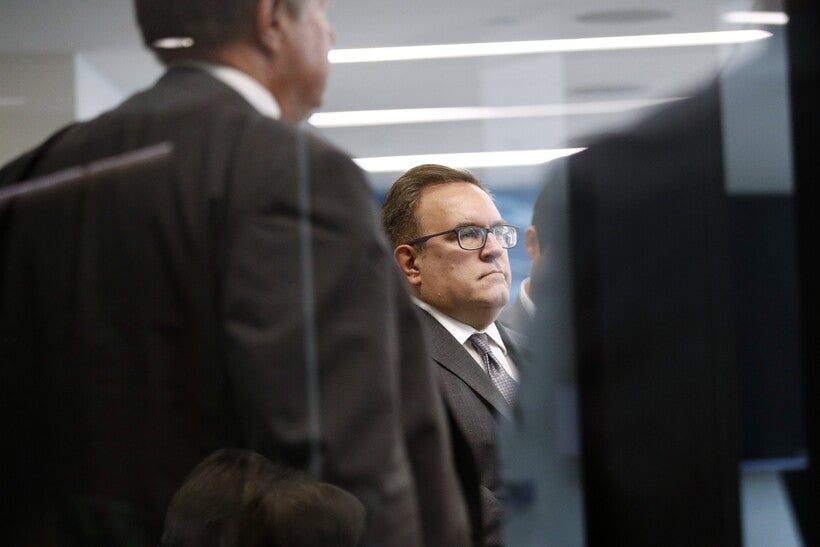 EPA Administrator Andrew Wheeler speaks with reporters after a news conference to announce plans to revoke the Waters of the United States rule, an Obama-era regulation that provided federal protection to many U.S. wetlands and streams, Thursday, Sept. 12, 2019, in Washington. Patrick Semansky/AP Photo

Business Groups Hail Move As A Win For States, While Environmentalists Say It Threatens Water Quality
By Danielle Kaeding
Share:

The Trump administration repealed an Obama-era rule Thursday that had expanded protections for waters and wetlands across the country. Business groups hailed the move as a win for property rights and state authority while environmentalists say the decision threatens drinking water for millions of Americans.

Top officials with the U.S. Army and Environmental Protection Agency said the repeal provides greater regulatory certainty for farmers, landowners and developers, as well as clarity on waters that fall under the federal government’s jurisdiction. The agencies will implement regulations in place prior to the 2015 rule that expanded the definition of "waters of the United States" (WOTUS) under the Clean Water Act.

Wisconsin environmental groups and state officials said the move represented a significant rollback in water protections, ignoring science and posing a threat to the state’s most vulnerable waters. The repeal threatens roughly 20 percent of streams across the country and more than half the nation’s wetlands.

"Unfortunately, I feel that when we’re all done we’re going to have something that only can be described as a partially Clean Water Act at best because we simply will not have the protections that are needed to make sure that we have fishable, drinkable, swimmable waters," said Todd Ambs, assistant deputy secretary with the Wisconsin Department of Natural Resources.

DNR Secretary Preston Cole wrote in an April 15 letter to the EPA that the proposed changes could eliminate protections for much of the state’s more than 5 million acres of wetlands.

The repeal comes as the state is contending with a myriad of water challenges, including lead service lines, contaminated wells, harmful algal blooms and emerging contaminants known as PFAS.

"There are too many rural and urban places in the state with unsafe drinking water. This really isn’t the time to be cutting back on clean water enforcement," said Jon Drewsen, communications director with Clean Wisconsin, Thursday. "The Trump administration’s action today represents a failure by the administration to protect the water resources that we all rely on."

However, industry groups and farmers have argued that the Obama-era rule expanded the federal government’s authority and granted them control over lands that only hold water temporarily.

Business groups called the repeal a win for landowners and said states should have the ability to manage resources at the local level, including Scott Manley, senior vice president of government relations with Wisconsin Manufacturers and Commerce.

"What the Trump administration has done with this rule today is to bring clarity to that picture by saying that the waters of the United States are what Congress intended it to be, which are those water bodies that are always navigable to the point that you can float a boat in them – not just a puddle," said Manley. "If we care about regulating a puddle, we can do that, but we’ll do that at the state level – not by the federal government."

Ambs argued the rule was never intended to apply to mud puddles, calling such statements misleading at best. Meanwhile, Manley contended many of the water bodies that the EPA was trying to oversee were already regulated under state law.

"The net impact of this is probably going to mean very little from an environmental standpoint," said Manley.

The EPA’s proposed rule revision announced in December 2018 defined that WOTUS would not include groundwater, ditches and waters that don’t exist continuously over time.

Ambs said the Trump administration’s action Thursday means the Popple River, one of the state’s five scenic rivers, would no longer be protected under the Clean Water Act. He said the river wouldn't qualify because it’s known to run dry during the summer.

The final rule is set to take effect 60 days after it’s published in the Federal Register.