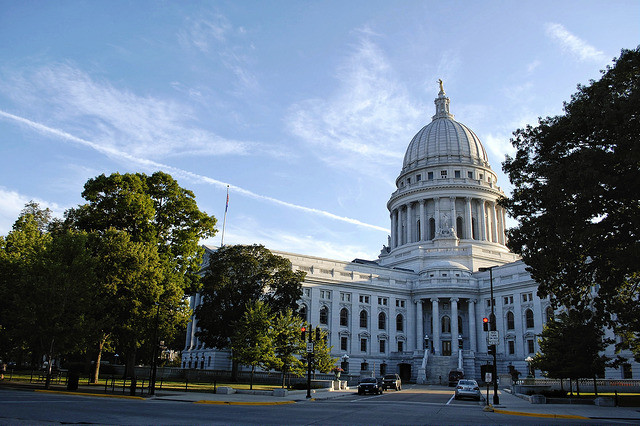 Priorities For Next Session Include Economy, Education and Public Safety
By Laurel White
Share:

State Assembly Republicans unveiled their goals for the next legislative session on Wednesday, focusing on the economy, education and public safety.

Highlights of the plan, titled "Forward," include a proposal to provide every high school freshman in the state with a tablet or laptop computer, increase in jail time for serious crimes and a commitment to solving the state’s potential $939 million transportation funding shortfall.

The program would provide a laptop or tablet to every high school freshman in the state, regardless of their income or whether they attend a public, private or charter school. The program would also include an initiative allowing students without internet access at home to check out portable wi-fi hot spots from their school.

Vos didn’t say how the program would be funded.

The Speaker also highlighted the Assembly GOP’s commitment to increasing public safety in the wake of recent unrest in Milwaukee. He said increasing jail time for serious crimes would be one way to do that.

"One of the things that I have been deeply disappointed in is the amount of people in this revolving door system where they are either not charged with serious enough crimes, or their prison sentences or jail terms are far too short for what I view as the seriousness of their crimes," Vos said.

A criminal justice expert from the University of Wisconsin-Madison said such changes might not be the best way to curb serious crime, however.

"If you can increase the risk of apprehension, you can sometimes dissuade people from engaging in the activity," said Cecilia Klingele, an assistant professor of law at UW-Madison specializing in criminal law. "Increasing penalties has a very marginal deterrent value in most cases."

Vos said other public safety legislation could include proposals to decrease jail time for minor offenses and increasing the number of prosecutors.

Assembly Republicans also committed to finding a solution to the state’s potential $939 million transportation funding shortfall. Vos said all options should be on the table to close the funding gap, including increasing vehicle registration fees.

The Speaker also said he hopes to continue the UW-System’s tuition freeze, which has been in place since 2013, but would also consider lifting the freeze after one year, depending on the circumstances.

"I would hope, as a goal, to have a two-year tuition freeze, but if the tuition freeze ends up becoming a reduction because we don't have additional resources, I also am open to a small increase in the second year," Vos said.

Other bills discussed by GOP lawmakers on Wednesday included a proposal to increase compensation for wrongfully convicted individuals, changes to the legislation governing CBD oil and alterations to how vacation rental companies like Airbnb are regulated in the state.

"If history is any guide, the Republicans will announce their legislative agenda where they say they support issues that are important to the people of this state, and yet, they will not follow through on real solutions," said Assembly Minority Leader Peter Barca, D-Kenosha, in a statement. "Not only do they not follow through, but they don’t discuss their actual big ticket agenda items that get first priority. For example, they never mentioned that they were going to pass right-to-work or repeal prevailing wage, which only hurts Wisconsin workers."

The next legislative session will begin Jan. 2017.