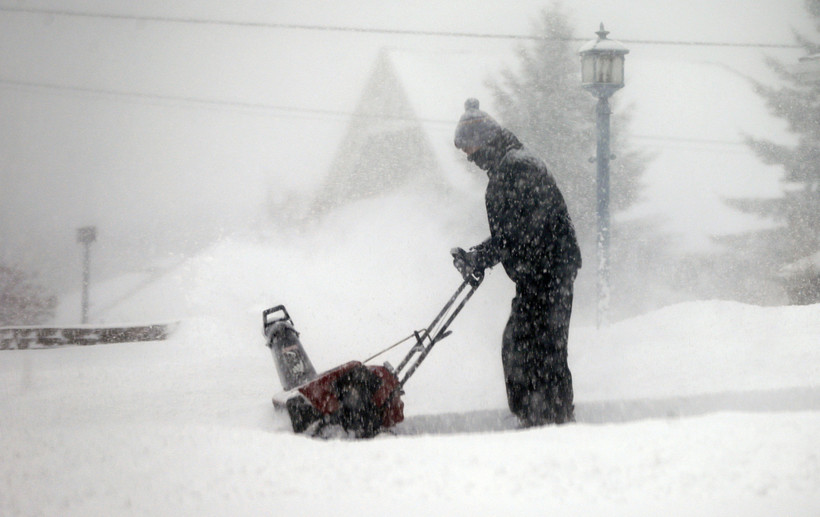 Green Bay Area Public Schools, the University of Wisconsin-Green Bay and Brown County circuit courts are among schools, government offices and businesses closed in the aftermath of a record blizzard in Wisconsin.

The weekend storm set snowfall records in Green Bay, Appleton and Wausau. In Wisconsin, the storm ranks as the all-time second largest snowstorm in Green Bay at 23.5 inches and a record April total of more than 35 inches there, according to the National Weather Service.

The storm made travel by land and air difficult, if not impossible. The Green Bay Packers were forced to delay the start of their offseason program Monday because players couldn't make it back to Titletown. The team gave the players Monday as another travel day.

Officials say no one was hurt when heavy snow caused part of a hotel roof to collapse in northeastern Wisconsin. The roof collapsed Sunday over the pool at an Econo Lodge Inn & Suites in Ashwaubenon, located in Brown County. No one was in the pool area at the time. The hotel was evacuated and guests were moved to other area hotels. More than a foot of heavy snow had fallen in the Green Bay area since Saturday.

Roof collapse at the Econo Lodge in Ashwaubenon. Officials say they evacuated 65 rooms and no one was injured. @WBAY pic.twitter.com/qzf0e0ZSBD

On top of the roof collapse and structural damage at several businesses in Green Bay over the weekend, a barn collapsed Sunday night in Denmark, said Jerad Preston, director of Brown County Emergency Management.

"I think it's just the weight of the snow with it being that big, heavy wet snow that was falling all day Saturday, and then the additional snowfall we got Sunday. Just the weight, things gave way, finally," Preston said Monday.

Preston said there have been no reports of any deaths or injuries from the collapses, and Brown County is still compiling the costs of the damage, as well as how much the municipalities are spending on plowing.

As of midday Monday, Preston said local public works departments are still plowing as they try to clear streets and highways.

While some major thoroughfares are in OK shape for driving, Getter cautioned that "many are very snow-packed and slippery. The crews are still out there plowing, and it's going to be a long process for cleanup. If people are traveling today, take extra time. And it's kind of funny to say in April, but it's true: make sure you have a winter kit in your car just in case you slide off the road. It might be a while before crews can get to you."

Getter also recommends going to 511wi.gov for the latest road conditions, and locations of accidents or disabled vehicles on the interstate system.

Getter stressed that continued light snow and winds in some parts of the state Monday still make for challenging conditions.

"We're still keeping an eye on things because it's a lot of snow. We're also concerned about another system that's going to move into the state Tuesday/Wednesday that could bring another 6-plus inches to central Wisconsin. We're ready to support local governments in any way we can," she said.

On Monday afternoon, the city of Milwaukee Department of Public Works called for an overnight snow removal overnight Monday into Tuesday morning. According to the city release, the snow removal will allow crews to access "as much of the street pavement as possible to remove snow effectively, efficiently, and most importantly, safely."

According to the Milwaukee County Medical Examiner's Office, a man shoveling snow over the weekend collapsed and died, making his death the sixth across the county as a spring storm dumped 2 feet of snow and more on parts of the Upper Midwest.

The medical examiner says 52-year-old Daniel Harris died of heart failure after shoveling snow at his girlfriend's apartment complex in Milwaukee on Sunday.

The storm also led Enbridge Energy to shut down operation of Line 5 until weather conditions improve in the Straits of Mackinac, where waves as high as 12 feet were reported. Line 5 carries up to 540,000 barrels of natural gas and oil per day from Superior to Sarnia, Ontario.

According to NWS, the 14.9 inches at Minneapolis airport from Friday through Sunday set a new record for the largest April snowstorm ever there. It's also the snowiest April on record in the Twin Cities. And it's the snowiest start to a calendar year, with 70.3 inches since Jan. 1.

In South Dakota, Sioux Falls set records for a single day in April at 13.7 inches Saturday and a record April total at 24.9 inches. Huron and Mitchell set two-day record totals for April of 15.5 and 16.2 inches respectively.

Current snow drift measurement at the office: approximately as tall as a 6' forecaster. pic.twitter.com/wb5qg3dtXr