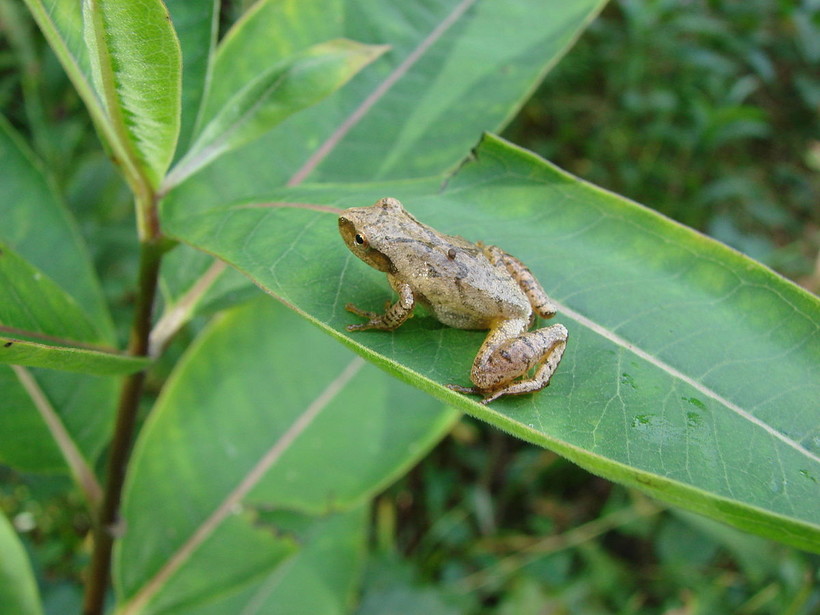 If you’re out in the woods this time of year, you may hear something you haven’t heard all winter: a drawn-out chorus of trills, punctuated by sets of high-pitched peeps.

It's a nocturne played by a band of toads and spring peepers that, to a human audience, signals that spring is finally here. But the amphibious musicians behind the recital are beckoning to each other that it’s breeding season.

Between now and early summer, all of Wisconsin’s 12 frog species will get their turn to perform. These include one species of toad, five tree frogs and six true frogs.

"There are probably about four species people can hear out right now," said Rori Paloski, a conservation biologist at the Wisconsin Department of Natural Resources: "The wood frog, the spring peeper, chorus frog and the leopard frog."

But Paloski said that anyone who frequents the state’s woods and waterways over the next few months will likely be rewarded with a rich assortment of arias as different species take turns scheduling their performances.

Among those who regularly catch these frog performances is a band of state-wide volunteers who participate in the annual Wisconsin Frog and Toad Survey.

Paloski’s colleague, fellow conservation biologist Andrew Badje, has been coordinating the survey since 2011. He said this citizen-based monitoring program asks volunteers to survey frog songs at 10 sites on three different nights during the spring and summer.

No doubt, that makes for quite a musical line-up.

In reality, these surveys help the DNR predict long-term trends. "We have the distribution as well as the long-term trend since 1984 of all 12 frog and toad species in the state," said Badje.

This is how DNR scientists know that the population of northern leopard frogs, which once was in decline, has started to stabilize. So too the spring peepers and chorus frogs. In contrast, the American toad is somewhat in decline.

Volunteer surveys have also helped the DNR look at the long-term effects of the 2012 drought. The good news is that all the species have managed to recover.

"It’s actually really cool, all the things that the volunteers can help DNR managers do," said Badje. "Without them, we really would not have a great long-term picture of what’s happening with frogs in the state."