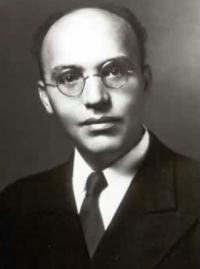 In the fall of 1931 a Berlin producer thought that a theater version of the opera The Rise and Fall of the City of Mahagonny could bring in good money during hard times.

Composer Kurt Weill and playwright Bertold Brecht made the going rough. During rehearsals, as they made cuts in the opera, Weill argued on behalf of his music, Brecht on behalf of his words. Their quarrels got so hot that their attorneys came into the theater and threatened each other. When a press photographer took a picture of Brecht standing next to Weill, Brecht knocked the camera out of his hands.

Weill stalked out of the theater with Brecht yelling after him: “I’m going to put on full war-paint and throw that bogus Richard Strauss down the stairs!”

Despite the sparring, The Rise and Fall of the City of Mahagonny enjoyed a modestly successful run of more than fifty performances.

But the split between Weill and Brecht would grow wider for reasons having nothing to do with artistic temperament. Within a year, Adolf Hitler had strong-armed his way into the German chancellorship, and Nazi demonstrators were threatening Jewish artists and closing down plays given to political satire. A day after the burning of the Reichstag building, which gave Hitler even greater power, Brecht drove to Prague, where he and his family began what would stretch into fifteen years of exile.

Despite the growing danger, Weill remained in Berlin, working on a symphony and music for a film, until one day in 1933, when a friend tipped him off that he was about to be arrested by the Gestapo. He packed a few things into his car, drove to the French border, and slipped past the German border guards on foot, eventually to make his way to Paris. There he and Brecht collaborated one last time on the sung ballet The Seven Deadly Sins, after which he went to the United States, where he became a composer of successful Broadway musicals.