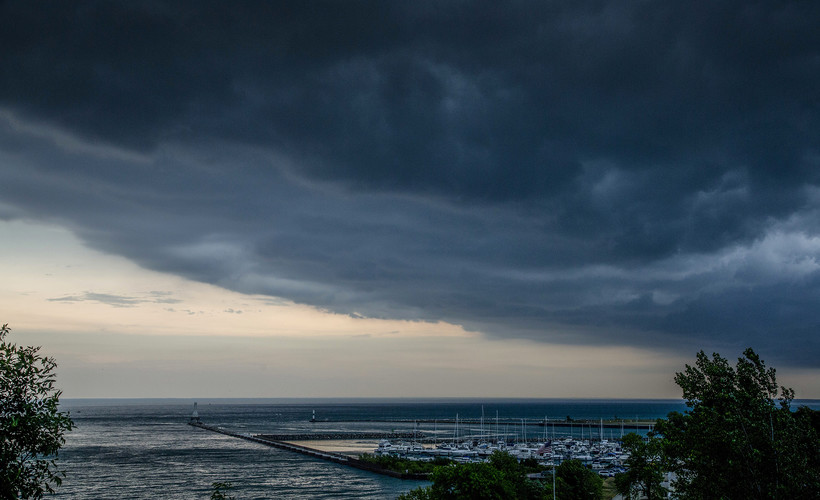 Southern Half Of Wisconsin Under Flash Flood Watch

National Weather Service: Up To 5 Or 6 Inches Of Rain Have Fallen In Areas Expecting Another Round Of Storms
By Rich Kremer
Share:

A flash flood watch has been issued for the southern half of Wisconsin after repeated storms and showers dropped up to 6 inches of rain since Monday. Smaller rivers and tributaries along the southern borders with Illinois and Iowa are already experiencing minor to moderate flooding.

The National Weather Service office in Sullivan says another round of thunderstorms will sweep through the state Thursday evening and into early Friday morning. Weather service meteorologist Ben Miller told WPR those storms will add to up to 4 or 5 inches of rain that have already fallen in areas near Green Bay and La Crosse.

Multiple rounds of rainfall are expected today and tonight. Due to the heavy rainfall the past few days any additional rainfall could lead to flooding. A Flash Flood Watch has been issued for all of southern WI. A few strong to severe storms are also possible later today. #wiwx pic.twitter.com/aCPRC9ES6O

"So, we’re starting to tally up some pretty decent totals in different locations across the state," Miller said. "And then we have another round of storms that’s going to come through later on today and tonight that could put down another inch or two in all those same areas. So, we’re not done with the heavy rain just yet."

Miller said far southwestern Wisconsin has gotten between 3 and 6 inches of rain over the last 48 hours which has swollen smaller rivers and creeks.

The weather service gauge at the Grant River near the Town of Burton hit major flood stage just after 11 a.m. Thursday at 22.65 feet. But Miller noted the Grant River is relatively small and prone to large fluctuations after heavy rain. The weather service issued a flood warning for central Grant County through 5:15 p.m. Thursday reporting water over several roads. Minor flooding was also reported on the Yellow River at Babcock in Wood County and on Turtle Creek near Clinton in Rock County as of 1:49 p.m. Another 18 gauges on rivers across the southern two-thirds of the state are near flood stage.

Miller said he doesn’t expect any flooding to impact homes or businesses but said higher than expected rainfall Thursday night could cause pockets of what he called "nuisance flooding."

"The setup is ripe for at least isolated flooding reports given the fact that the ground is as saturated as it is and we’re expecting at least another inch or two of rain with locally higher amounts," said Miller.

Weather service meteorologist Todd Shea of the La Crosse office said between 3 and 5 inches of rain fell in localized areas along the southern border near the Mississippi River on Wednesday night.

"That’s produced some flooding on some of the smaller rivers, creek flooding and as of late morning here there are still reports of water over some of the roads near those waterways in that far southwest part of the state," he said.

The flash flood watch for the southern half of the state runs through 7 a.m. Friday.