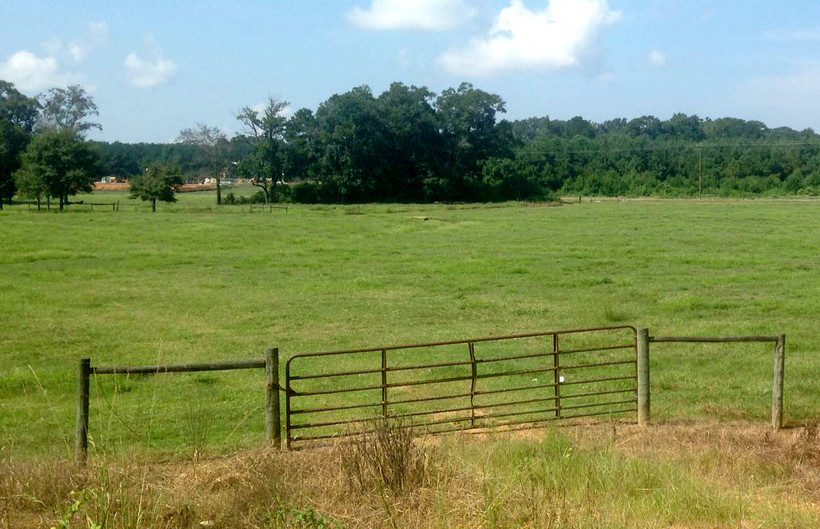 Beyond this field near McComb, Miss. lies a fracking well operated by Encana Corporation, which uses frac sand mined from Wisconsin to extract oil and natural gas from deep-rock formations. Photo: Tina Casagrand.

Fracking In South Creates Jobs, But Could Have Negative Consequences For Water And Air Quality
By Chuck Quirmbach
Share:

Just off a rural highway near McComb, Mississippi, freelance journalist Tina Casagrand takes out her binoculars to look across a cow pasture at some equipment about a quarter-mile south. She describes what she can see of a hydraulic fracturing operation.

“There's a lot of red clay dirt — some Mississippi clay there — and there’s a gas pump well, and there's some orange flames burning really constantly,” she said.

The flames are coming from the natural gas being flared off at the drilling site, which is one of several in southwest Mississippi operated by the Encana Corporation. The firm says it uses Wisconsin and Minnesota sand in order to “frack” — a process in which natural oil and gas get extracted from deep-rock formations.

The digging of that Wisconsin sand has created jobs and health controversies alike in the Badger State. But the use of the sand for oil and gas extraction is also leaving many citizens and environmental groups closer to the fracking wells themselves concerned.

This fall, Encana wouldn't let a group from the Society of Environmental Journalists on its property, saying the work crew there wasn't equipped to handle a tour bus. However, Don Briggs of the Louisiana Oil and Gas Association did explain how the frac sand is used underground. He said an injection of sand and water help keep open what he calls “bullet holes” in the fractured rock.

“Otherwise if you didn't have the sand in it, it would close right up and you’d have no production at all. So the quality of the sand is so important in different formations,” said Briggs.

But the creation of that water-sand mix being injected into the wells may be threatening some waterways, even in usually wet southern Mississippi and Louisiana, according Scott Eustis of the Gulf Restoration Network.

“You know, just this process involves so much water,” he said. “And it's being taken out of some of the only protected streams in Louisiana — streams that the environmental movement has spent 30 years preserving so those streams are actually swimmable.”

Other people have raised concerns about the methane released into the air at the fracking operations and the potential for groundwater pollution.

Louisiana State University Professor David Dismukes, who heads the school's Center for Energy Studies, acknowledges there are environmental issues, but said that so far economic development has ruled the day.

‘It’s been increased job opportunities. You’ve got corporations that are putting regional headquarters in those locations that are in turn creating middle-management positions,” said Dismukes.

But some communities — perhaps those with more economic power — are trying to say no to the fracking boom. At Saint Tammany Parish, Louisiana, just north across Lake Ponchartrain from New Orleans, opposition has been particularly strong.

Houston-Grey would like to see the two states be partners in environmental protection. The political reality is that some Louisiana lawmakers are pushing hard this month in favor of another project with petroleum ties: the Keystone XL Pipeline.