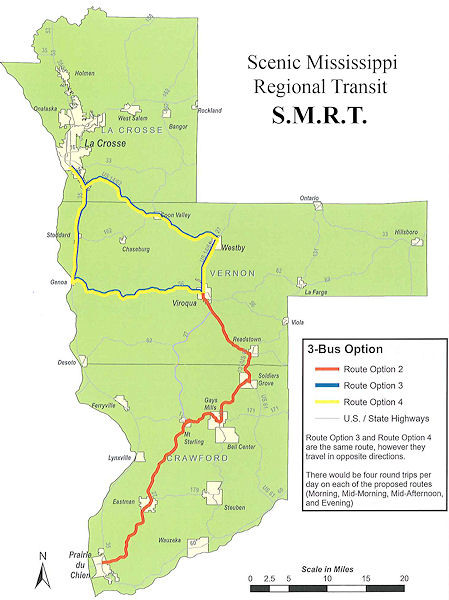 Southwest Wisconsin is the latest area to get a regional transit bus system up and running.

The Scenic Mississippi Regional Transit (SMRT) buses will travel from Prairie du Chien to Viroqua to La Crosse, and many small towns in between.

Peter Fletcher is the Transportation Planner for the Mississippi River Regional Planning Commission. He says the main purpose is to get people to and from work. The bus makes stops at places like 3M in Priairie du Chien, or Trane in La Crosse: "We also recognize there's a large elderly and senior population, disabled population that needs the ability to get to and from doctors appointments, it's becoming a huge expense, senior transportation."

That's why the bus also stops at hospitals and major shopping areas. Fletcher says there's also been an uptick of college students taking the bus from rural areas into La Crosse.

The SMRT buses, and a similar system in southeast Wisconsin, are paid for through a combination of federal, state, and local money, along with investments from employers.

The Janesville-Milton-Whitewater Innovation Express started last year, partially, because Generac Power Systems added hundreds of jobs in Whitewater. City of Janesville Transit Director Dave Mumma says workers have a more reliable way to their jobs, "Operating cost was another thing. It was cheaper to ride the bus than keep a car going. I had one individual tell me that they contacted their insurance agent and they were able to get a lower rate on their insurance because they weren't driving their car back and forth every day."

Mumma says public transportation is finally being looked at as a regional matter, not just a city one.